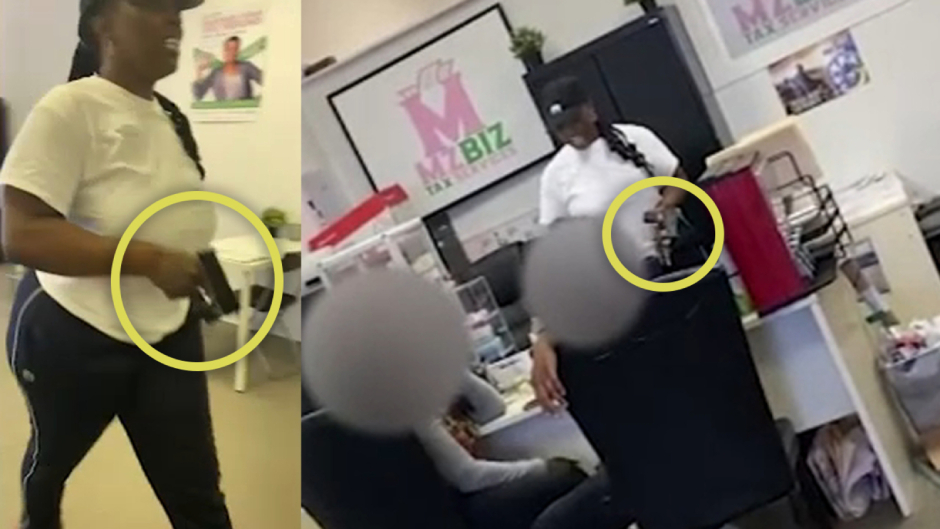 The suspect has a felony conviction for a multimillion-dollar robbery at an ATM servicing company.

A tax preparer in Texas was arrested on Thursday for allegedly pulling a gun on customers who were dissatisfied with her services.

Marquita Boyle, who filmed the alleged encounter, told KTRK that the IRS audited her after she had her taxes done by Latunya Wright’s business, MZ BIZ, which is located in Houston. Boyle reportedly went to Wright’s business on Thursday to have her review some paperwork that had inconsistencies.

Boyle claimed Wright, 46, was already arguing with other customers when she brandished a gun, cocked it, and pointed it at a male customer. Wright allegedly also blocked the exit while still holding the gun.

As Boyle filmed the terrifying incident, Wright reportedly snatched her phone, struck her in the head with the gun, and stashed the phone in a file cabinet after attempting to delete the footage.

“My vision is blurry in my left eye. It’s still blurry. I have headaches. My anxiety is through the roof,” Boyle told KVRK.

Wright’s attorney told then news station that the people involved in Thursday’s incident were not Wright’s clients and had come into her business to pressure her about their refunds. The lawyer also claimed his client suffered a dislocated shoulder.

Wright was charged with aggravated assault and aggravated robbery. The news outlet reported that she has a 2012 felony conviction for a multimillion-dollar robbery at an ATM servicing company.