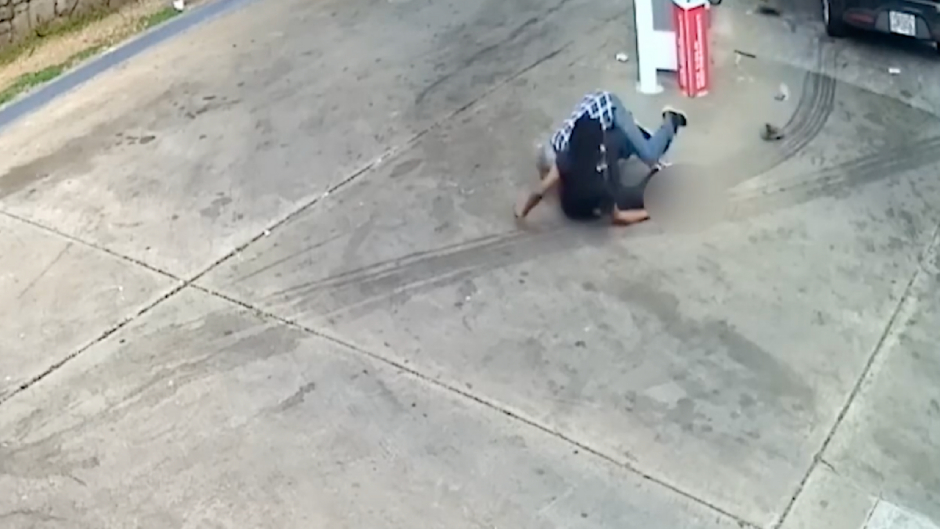 Police in Georgia are looking for the suspect in last month’s armed carjacking attempt at a gas station.

According to the Atlanta Journal-Constitution, Atlanta police released surveillance footage of the March 11 incident that unfolded at a Chevron on McDonough Boulevard. The 82-year-old victim reportedly said he was standing at the gas pumps when the suspect first approached him.

According to a police report, the victim said he went to open his car door when the suspect brandished a gun, demanded his car, and snatched the keys from his hand. The victim told WAGA that he managed to retrieve paperwork from a previous doctor’s appointment.

“He just said ‘Give it up’ and I asked ‘To give what up?’ and he said ‘You know what I’m talking about. Give me them keys,” he recalled.

Surveillance footage shows the victim taking the suspect to the ground while trying to retrieve his keys. The victim tore off part of the suspect’s mask during the scuffle, the Journal-Constitution reported.

After the altercation, the suspect stood up and allegedly pulled a gun on the victim. The suspect then asked the victim if he “want[ed] to die,” to which the victim responded “no” before running toward the convenience store.

Police said the suspect got in the victim’s vehicle but, for unknown reasons, was unable to get the car to start. The suspect allegedly fled on foot instead, taking the car keys with him.

The car keys were eventually found on a sidewalk near the gas station. The elder suffered minor injuries to his shoulder and did not require hospitalization.

“They are getting desperate. That’s what they are changing to the most vulnerable people now,” the victim said. “I’m just glad to be alive.”