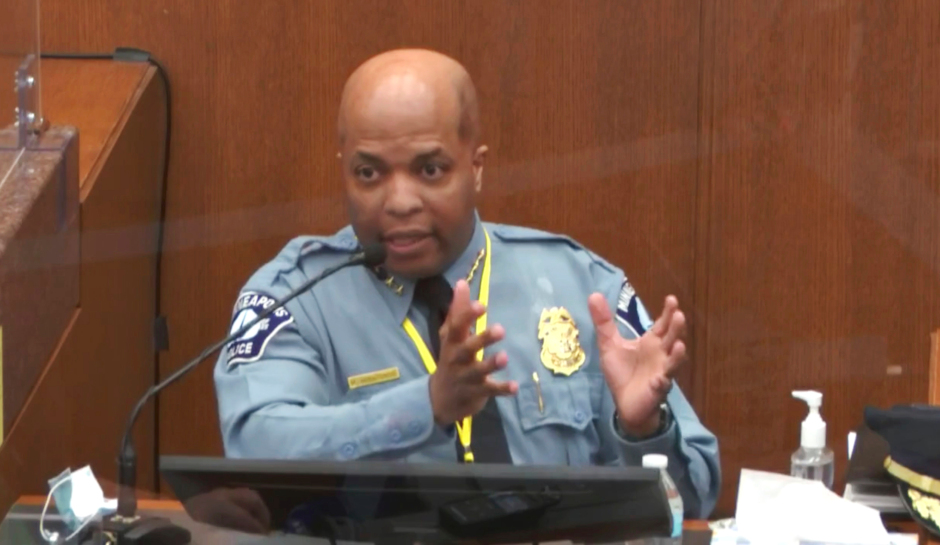 Minneapolis police chief: Kneeling on a suspect’s neck for 9 minutes is ‘in no way, shape, or form’ our policy

The man who fired then-Minneapolis police officer Derek Chauvin and three other officers after George Floyd’s death testified Monday that what Chauvin did “in no way, shape, or form is anything that is by policy, part of our training, and is certainly not part of our ethics or values.”

Minneapolis Police Chief Medaria Arradondo was the second witness of the day as the the second week of Chauvin’s trial got underway, and he spent several hours on the stand, detailing policy and procedure and discussing the whens and whys of using force versus some de-escalation tactics, the Minneapolis Star-Tribune reported.

As for the case at hand, Arradondo said Chauvin should not have kept his knee on Floyd’s neck for more than nine minutes.

“Once Mr. Floyd had stopped resisting — and certainly once he was in distress and trying to verbalize that — that should have stopped,” the chief said.

“There’s an initial reasonableness of trying to just get him under control in the first few seconds,” Arradondo said, “but once there was no longer any resistance, and clearly when Mr. Floyd was no longer responsive and even motionless, to continue to apply that level of force to a person proned out, handcuffed behind their back, that in no way shape or form is anything that is by policy, part of our training and is certainly not part of our ethics or values.”

Defense attorney Eric Nelson question Arradondo about his own experience using force and whether the decision to do so is different in every case. Arradondo agreed.

But the chief stressed his belief that it’s imperative for police officers to come from a place of compassion, regardless of the situation.

“It is my firm belief that the one singular incident we will be judged forever on will be our use of force,” he said. “While it is absolutely imperative that our officers go home at the end of their shift, we want to make sure our community members do too.”

Prior to Arradondo’s testimony, the court heard from Dr Bradford Wankhede Langenfeld, who was the senior medical resident at HCMC when Floyd was brought in. Langenfeld said Floyd ‘s heartbeat was not “sufficient to sustain life” when he came into the emergency room and that he believed he had gone into cardiac arrest because of a lack of oxygen. He also said that he saw no evidence of lifesaving efforts performed by anyone on the scene prior to the arrival of an ambulance.

Floyd was in cardiac arrest for an hour he said, and had no pulse and minimal electrical activity. At that point, he said, he pronounced him dead.

The final witness on Monday was Fifth Precinct Inspector Katie Blackwell, who was the head of training at the time of Floyd’s death on May 25. Asked about the method Chauvin was using to restrain Floyd, she said, “I don’t know what kind of improvised position this is.”

Blackwell said that Chauvin had received training in 2016 and 2018 regarding how to handle a handcuffed, facedown suspect. She said the suspect should be put “in the side recovery position or an upright position … as soon as possible, or run the risk of asphyxiation.”

Testimony resumes Tuesday. Chauvin is charged with second and third degree murder and manslaughter. The other three officers involved in Floyd’s death — J Alexander Kueng, Thomas Lane, and Tou Thao — are expected to go on trial in August on charges of aiding and abetting.

[Featured image: In this image from video, witness Minneapolis Police Chief Medaria Arradondo testifies in the trial of former Minneapolis police Officer Derek Chauvin for the May 25, 2020, death of George Floyd. (Court TV via AP, Pool)]