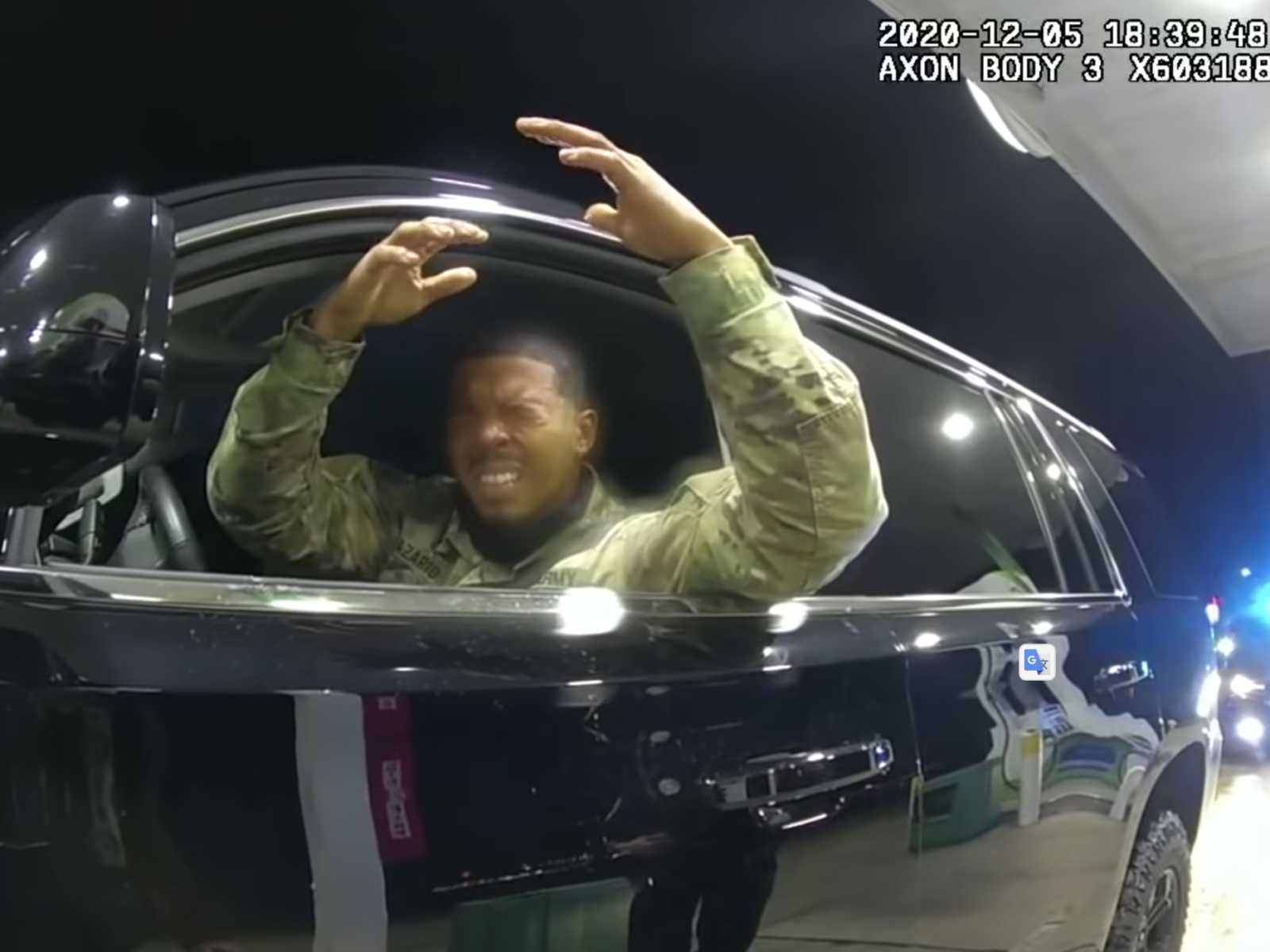 An Army lieutenant has filed suit against two Virginia police officers claiming his constitutional rights were violated when they pulled him over, pepper sprayed him in the face, and threatened to wreck his military career if he didn’t cooperate during a traffic stop late last year.

Lt. Caron Nazario, 27, was behind the wheel of his new Chevy Tahoe last December when he saw a patrol car signal for him to pull over. Rather than pull over on a dark road, Nazario flipped on his turn signal and slowed down until he spotted a well-lit BP gas station a half mile away, where he stopped, the Virginian-Pilot says, citing the lawsuit.

Meanwhile, Windsor Police Officer Daniel Crocker radioed that he was trying to pull over a vehicle without a rear license plate — the tag is seen taped in the rear window, as is common with a just-purchased vehicle, in his body cam footage. Another officer, Joe Gutierrez, heard Crocker’s call and joined the traffic stop.

In a report written after the traffic stop, Crocker said the driver, although driving at a low rate of speed, was “eluding police” and he considered it a “high risk stop.” So when the two officers pulled in behind Nazario — a Black Latino in full Army uniform — they drew their weapons and pointed them at the driver. Seeing the officers with guns drawn, Nazario set his cell phone to record and put it on his dashboard.

“I can think of absolutely no reason under the sun as to why those officers should have exited their vehicles with their firearms trained on my client or any other,” Nazario’s lawyer, Jonathan Arthur, told 13 News Now.

The lawsuit says the officers shouted conflicting orders at Nazario, who repeatedly asked what was going on, the Virginian-Pilot reported. At one point, he told the officers he was scared to get out of his vehicle. “You should be,” Gutierrez responded, according to the complaint.

The officers tried to pull Nazario out of the vehicle, and he asked that they call a supervisor. According to the lawsuit, Gutierrez responded by pepper spraying him multiple times.

Blinded and choking by the chemical, Nazario got out of the vehicle and again asked for a supervisor. Gutierrez responded with “knee strikes” that knocked him to the ground. Gutierrez and Crocker hit him several times, then handcuffed him.

Nazario told the officers he was concerned for his dog, who was in a crate in the back of the SUV and had begun to choke from the pepper spray. Crocker opened the tailgate. Nazario told them he didn’t pull over right away because he wanted to do so in a well-lit area. Gutierrez responded that was “reasonable” and “happens all the time.” “Eighty percent of the time it is a minority” who does that, he said, according to lawsuit.

Gutierrez told Nazario the problem was that he refused to get out of the vehicle, the complaint says, and then threatened to charge him with obstructing justice, eluding police, and assaulting a law enforcement officer.

Eventually, the officers called the Windsor police chief as well as medics who treated Nazario for the pepper spray. Then they let him go, without filing charges.

“Realizing that they had acted illegally,” the lawsuit says, the officers told Nazario that if he “would chill and let this go,” they would not file charges against him. But if he fought it, which Gutierrez noted he had the right to do, Nazario would be charged and would have “to go to court and notify his command.”

The two officers filed reports with “near identical” misstatements about the incident, according to the lawsuit, which included their reports. Both officers said Nazario refused to show his hands and slapped their away when they reached for him to get him out of the vehicle. And Gutierrez wrote that the “knee strikes” came when Nazario refused orders to get on the ground and resisted arrest.

But Arthur told the Virginian-Pilot that the officers’ body camera footage as well as a cell phone recording made by Nazario don’t back them up.

“It’s all right there in the footage,” he said.

According to the lawsuit, the Windsor officers had no probable cause to charge Nazario and the stop was illegal. It also alleges that the officers threats to hinder Nazario’s career were made to intimidate him into not reporting their own conduct.

“Everyone has heard, I believe, in the doctrine of qualified immunity that protects law enforcement if they don’t violate clearly established laws,” Arthur told 13 News Now. “In this case, we believe that both the United States Supreme Court, the Fourth Circuit, and the Virginia Supreme Court have all said that this type of behavior is completely inappropriate.”

Both Gutierrez and Crocker wrote in their reports that they chose not to file charges to not interfere with his military career.

“I made the decision to release him without any charges,” Gutierrez wrote. “The reason for this decision is simple; the military is the only place where double jeopardy applies. Meaning that whatever happened in civil court, the military could still take action against him. Being a military veteran, I did not want to see his career ruined over one erroneous decision.”

Crocker wrote that he didn’t want to see the lieutenant’s career ruined for “poor judgment.”