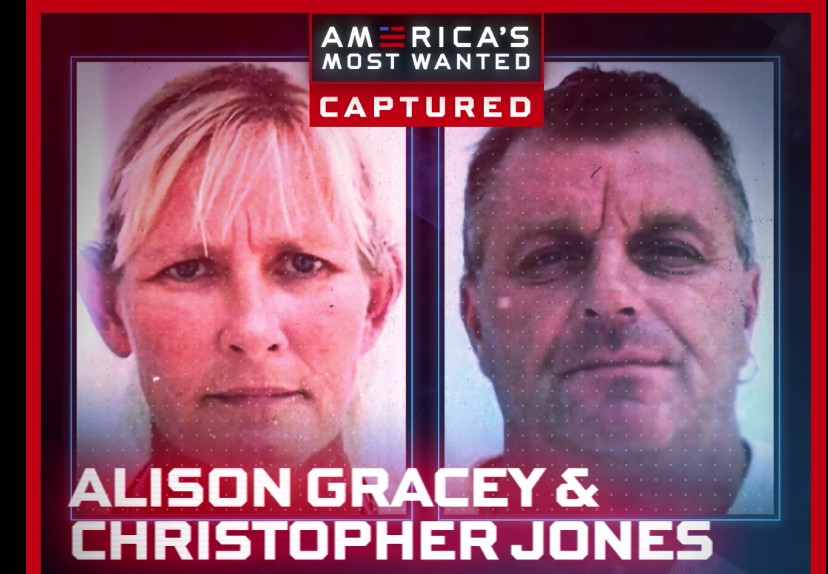 Alison Gracey and Christopher Jones were arrested recently in Madrid, Spain, four days after they were featured on the television program.

The pair are being held on charges of involuntary manslaughter and making a false official statement, according to a Facebook post from the show.

Gracey and Jones, both British citizens, have been on the lam for almost a decade. They reportedly ran a scuba expedition company near Key Largo, Florida, but disappeared after a client died in 2011 when a boat capsized. The two had been told repeatedly about significant safety issues with the boat.

In its third episode, “America’s Most Wanted” used 3D holograms to depict how the two might look today, Decider reports.

Criminal defense attorney Yodit Tewolde, a legal analyst for the program, described the now-53-year-old Gracey as likely around 145 pounds and 5-foot-7.

“Now she was born in Ireland, so she has an Irish accent, according to authorities,” Tewolde said on the program, according to Decider. “And she’s typically been a blonde, but she has been on the run for so long, that she might have changed her look up a bit.”

The hologram then visualized Gracey with different hair colors.

For Jones, now 56 and estimated to be about 275 pounds and 6-foot-3, the show portrayed him with and without aviator sunglasses, which he was known to wear.

“America’s Most Wanted” has not confirmed whether it received a tip that led to the arrests, but the investigation in Spain remains active, according to The Wrap.

During “America’s Most Wanted Overtime”, Nancy Grace and her panel told viewers what to be on the lookout for in order to catch the fugitives.

In the 2011 incident, 36-year-old Aimee Rhoads and five other passengers went out scuba diving through the tour company Scuba Shack, which Gracey and Jones owned at the time.

The boat capsized and sank, and Rhoads had become pinned underwater and drowned before she was brought to the surface, according to Decider.

Investigators reportedly determined that Gracey and Jones were aware of significant safety problems with the boat the day before the outing but did nothing to fix it. The couple fled Key Largo and were arrested in St. Maarten in June 2015, but they were released on bail. They again disappeared and their last known sighting was in April 2017 in France.

The show features fugitives wanted in connection with crimes around the United States and staffs a phone bank of law enforcement officers to receive tips.

“In the 10 years since ‘America’s Most Wanted’ went off the air, there’s been an explosion in technology,” Vargas told The Wrap. “People now have an HD camera in their pocket in the form of their phone. And they can instantly take pictures and videos and text us and reach us on social media platforms. It’s just an unbelievable interconnectedness.”