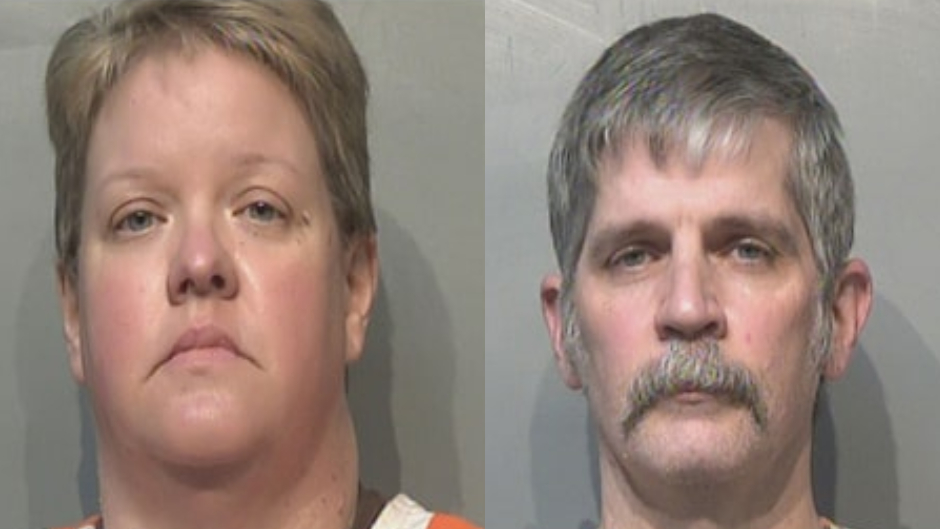 Neighbors said they believed the teen was 11 due to his size. The victim reportedly had bone deformities in his foot which were possibly caused by wearing a shoe that was too small for an extended amount of time.

An Iowa couple was arrested last Monday for allegedly abusing and neglecting their adopted 16-year-old son, who has special needs and reportedly weighed 78 pounds.

Jennifer Ryan, 48, was accused of taking her son to her job at an auto repair shop on February 22 — where she used zip ties to tie his left ankle and belt loop to a chair, KCCI reports. The woman and her husband, Richard Joe Ryan, 47, are also accused of tying the teen to his bed frame and withholding food from him for months.

An anonymous tipster reportedly contacted the Iowa Department of Human Services after noticing the bound victim at Jennifer Ryan’s place of work.

According to KCCI, a subsequent investigation revealed that the Ryans kept the boy in his room and he was barred from leaving without an escort. Authorities also claimed the couple installed an alarm that alerted the household when he tried to leave his room.

The couple allegedly only gave the teen lunch and dinner which were typically leftovers from the day before. He would be deprived of a meal if he was found stashing food he had stolen in his bedroom, court documents stated.

“He also endured physical abuse often being struck in the face or on the head with a wooden back scratcher or repeatedly thrown to the floor,” court documents detailed.

The Des Moines Register reported that the victim, who was kept in a room without a bathroom, was also punished if he urinated in his bed.

Doctors reportedly determined the 17-year-old weighed 78 pounds — and neighbors told KCCI that they believed the boy was 11 due to his size. The nature of the boy’s disability was not disclosed.

According to reports, doctors located several abrasions on the boy that were not healing and bruises that are believed to been caused by being struck in the face and head with a wooden back scratcher. Investigators suspect some of the injuries were caused by being thrown on the floor.

The victim reportedly also had bone deformities in his foot which were possibly caused by wearing a shoe that was too small for an extended amount of time.

The teen’s biological mother, Shelly Green, told KCCI that she lost custody of her son in 2012 due to alcohol abuse issues and poor living conditions.

At age seven, Green’s son was placed in foster care at the Ryans’ residence. The couple officially adopted him in 2012, according to the news outlet.

Green said she has been sober for 10 years and has been fighting to regain custody.  Her two other daughters were adopted by their maternal grandmother, who reportedly tried to adopt the boy as well. The grandmother said she was not allowed to adopt him because she is not biologically related to him.

Green told KCCI that she has not seen her son in a decade. Green and the grandmother claimed they recently contacted Human Services to restart the adoption process.

Meanwhile, Jennifer and Richard Ryan are charged with first-degree kidnapping and neglecting a dependent person. The couple reportedly has two children, but it is unclear whether they were also subjected to the abuse and if they remain in their custody.