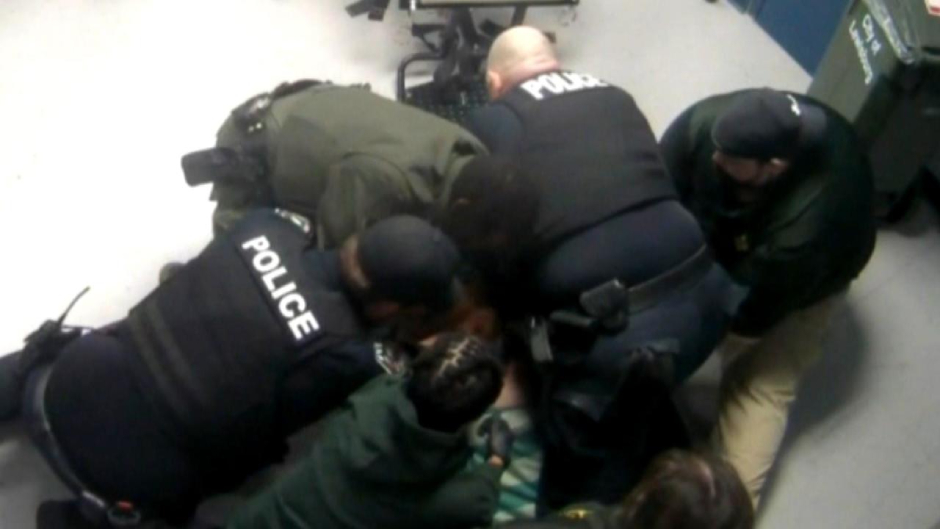 ‘You shouldn’t be able to breathe’: Officers taunt handcuffed man minutes before he dies [VIDEO]

Recently-released footage shows last year’s death of a Tennessee county jail inmate who had several officers on top of him in the moments leading up to his death.

Jailers reportedly called Lewisburg police for backup after Jennette refused to get in a restraint chair. WTVF reported that Jeannette was arrested two days earlier for resisting arrest, indecent exposure, and public intoxication.

In the May 2020 footage, Jennette is heard gasping and telling officers that he could not breathe as officers call for leg restraints.

“You shouldn’t be able to breathe, you stupid b*****d,” a female officer is heard exclaiming.

Jennette was already handcuffed but officers used leg restraints to essentially hogtie him. The Washington Post reported that several officers were on top of Jennette, who was in the prone position.

At some point, an officer tells Jennette, “You little stupid b***h. … I’m gonna break your … foot in a minute.”

Roughly four minutes after putting Jennette in the prone position, an officer warns, “Easy, easy … Remember asphyxiation, guys.” Another officer then claims they are not pressing on his lungs, suggesting he should be able to breathe.

According to The Washington Post, an autopsy report stated that Jennette’s manner of death was a homicide — and listed a combination of asphyxiation and drugs, including methamphetamine, as contributing factors. The report also noted that he also suffered multiple broken ribs.

Citing jail logs, WTVF reported that Jeannette was hallucinating and detoxing following his arrest. Jailers reportedly put him in a restraint chair a day before the fatal encounter because he was hitting his head on the cell walls.

A grand jury has already declined to criminally charge the officers involved in the fatal May 2020 incident. The Tennessee Bureau of Investigation closed its investigation into Jennette’s in-custody death after several months.

The pending federal lawsuit lists Marshall County, the city of Lewisburg, and several officers as defendants.