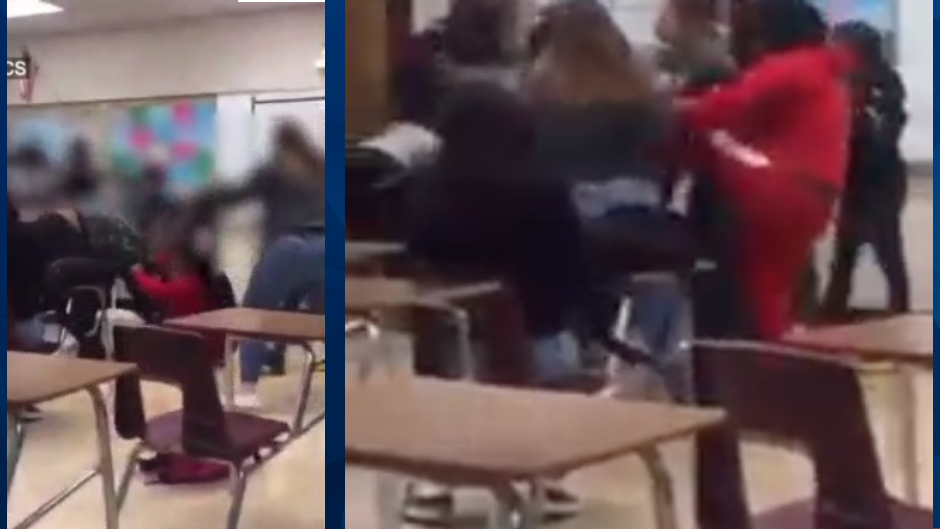 SEE IT: Mob of 8, including a mom, attack teen girl in high school classroom [Police]

‘This was clearly a targeted attack on one student, not a random act of violence,’ police said

A group of eight people — including two adults — reportedly assaulted a 14-year-old girl at a North Carolina high school on Tuesday in an attack that has sparked security concerns.

WGHP reported that investigators believe the brawl that transpired inside a Southern Guilford High School classroom stemmed from a dispute at a bus stop a day earlier. Police said a 16-year-old allegedly led the altercation, as she guided the seven suspects to the upstairs classroom after the group gathered in the school.

Teachers and a school resource officer reportedly could not prevent the assault but they immediately intervened. The victim, who was not hospitalized, suffered minor injuries which include bruises and cuts to her face, according to reports.

“You look at parents as the ones who are supposed to be giving the kid guidance as to how to handle these types of things, not encouraging it,” Hall commented.

Citing police, WXII reported that one of the students had texted a group of friends and a parent and instructed them to come to Southern Guilford High School.

According to WGHP, the suspects who did not attend the high school gained entry to the building after two students unrelated to the incident walked out of a locked door. Hall said the 16-year-old suspect ensured the locked door remained open long enough for the group to get inside.

The suspects reportedly fled the classroom after the attack, but the school resource officer and staff apprehended them in the parking lot. The school’s principal sent a message to parents more than a day after the incident, according to WGHP.

WXII reported that the Southern Guilford High School students involved in Tuesday’s incident were suspended while the other three students will also face disciplinary action. The suspects who are younger than 18 will reportedly be issued juvenile petitions for assault.

The adults who allegedly attacked the 14-year-old girl are expected to be charged with assault, first-degree trespassing, and inciting a riot. Officials have not yet publicly named the adults facing charges in connection with Tuesday’s altercation.