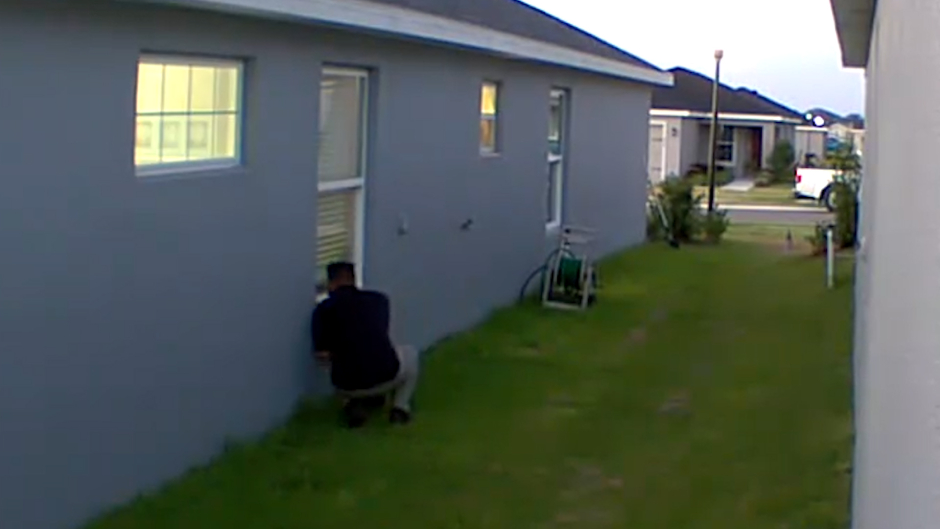 A Florida man was arrested last week, hours after he was allegedly caught looking into a family’s home a second time.

A neighbor’s surveillance cameras reportedly filmed Santos Pantoja, 39, standing outside an Auburndale home before 7 a.m. on May 28. Homeowner Sarah Martinez told WFTS that days earlier on May 24, she was putting makeup on in her bathroom when she looked into a mirror and saw the suspect staring at her through her window.

Martinez claimed she fled her house and saw the unknown man drive away in a truck.

Investigators said Martinez and her 17-year-old daughter were the only people home at the time. The incident resulted in a neighbor installing cameras around their home that reportedly caught Pantoja returning to the residence four days later.

On May 28, Pantoja was reportedly filmed peering into Martinez’s bathroom in addition to her 17-year-old daughter’s bedroom. A neighbor had confronted Pantoja at some point and he claimed he was looking for his missing daughter, according to WFTS.

“There is a point where he reaches up and pushes on my daughter’s window, to see if it is unlocked, I am presuming,” the girl’s father told WTVT.

Citing investigators, the news outlet reported that Pantoja was previously incarcerated for manslaughter, burglary, and grand theft. However, the details surrounding his prior convictions were not disclosed.

Polk County Sheriff Grady Judd said Pantoja works for a landscaping company and was using his work truck at the time of last month’s incidents.

“They [Pantoja’s employers] were very cooperative with us. They looked and said we don’t have any jobs in that neighborhood, but the GPS on the vehicle showed he was there at that time,” the sheriff said, according to WFTS.

Martinez posted the surveillance footage to her neighborhood Facebook group, resulting in Pantoja’s arrest hours later. He is charged with burglary, possession of burglary tools, voyeurism, and stalking.

Jail records show that Pantoja was released from custody two days later on May 30. His arraignment is scheduled for June 30.