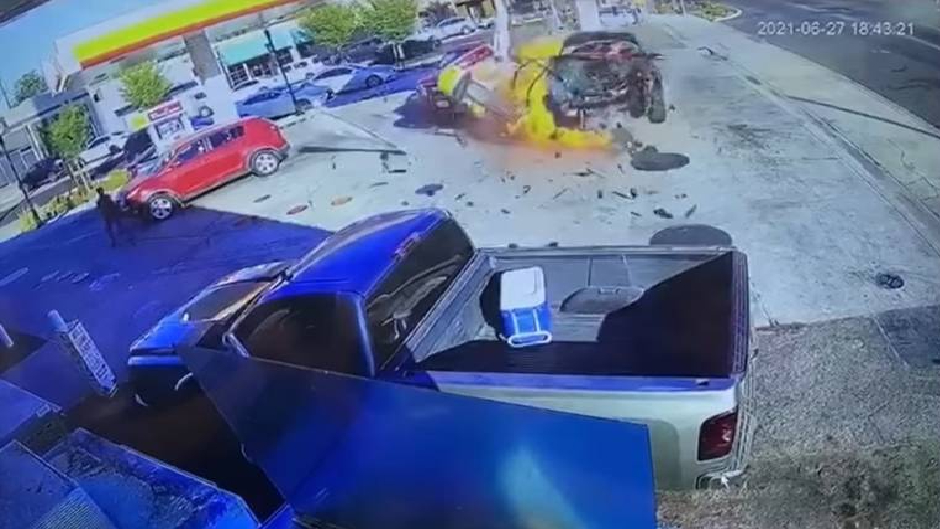 A woman was driving under the influence when she caused last month’s fiery crash at a California gas station that left herself and her two children injured.

Surveillance footage at a Shell station in Ceres apparently showed Isabel Zepeda, 23, driving her Nissan sedan at full speed into a gas pump on June 27. Zepeda’s 5- and 4-year-old children were in her car at the time, according to the Modesto Bee.

Footage showed a woman run out of the way as Zepeda’s car recklessly veers off Highway 99 and into the gas station. People filling up their SUV at a gas pump were seen pushing themself up against their car to avoid getting hit as Zepeda collided with an adjacent pump.

The people who were filling up their SUV were also filmed yanking children out of the SUV and fleeing from Zepeda’s burning car, the Bee reported.

Zepeda and her two children suffered minor injuries in the crash. Police said debris from the crash hit an occupied Kia, but its occupant was unharmed.

“Fortunately there were no injuries, the gasoline pump safety systems engaged, and the fire was extinguished before it was able to spread to nearby cars and buildings,” the Ceres Fire Department said in a Facebook post.

Zepeda was charged with DUI and child endangerment. Court records indicate that she is free on a $50,000 bond and is due back in court on August 12.