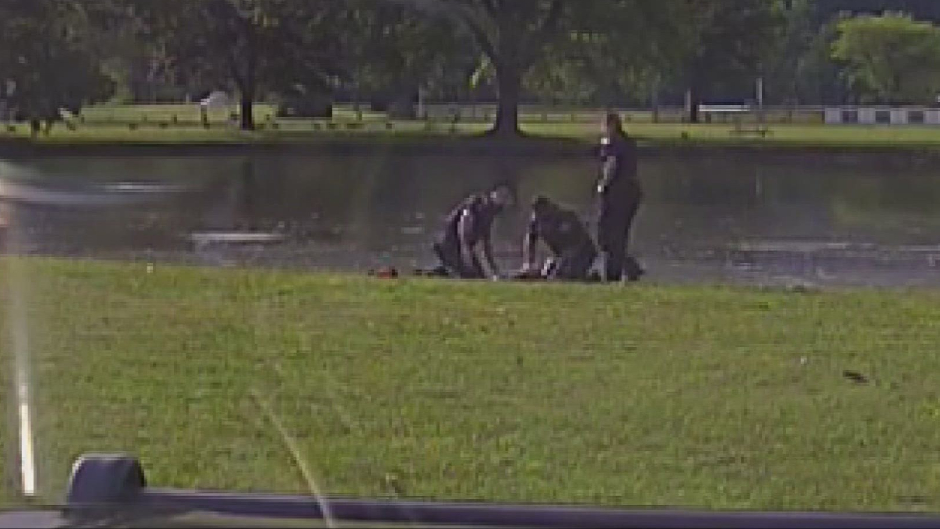 SEE IT: Cops race to find boy floating in pond, SAVE HIS LIFE

Last month, police in Ohio rescued a 4-year-old boy who vanished and was found in a local fishing pond.

Painesville police said in a Facebook post that Paolo Moctezuma was initially reported missing from a relative’s residence located north of Painesville’s Recreation Park on June 12. He was believed to have escaped through a sliding back door and entered the park via a closed rear exit while his parents were at work.

Less than an hour after Moncetzuma’s disappearance, officers responded to the park amid reports of a child floating in the pond.

According to police, responding officers initially had trouble locating Moctezuma due to debris covering the pond. Officer Daniel Thompson and Sergeant Matthew Tycast eventually spotted the silhouette of a small child and air bubbles roughly 20 feet from the bank of the pond — prompting Officer Chad Balausky to obtain a throw rope as his colleagues entered the pond to try to rescue the boy.

Moctezuma did not appear to be breathing after he was brought to shore. Thompson performed CPR until Tycast, who cleared the boy’s airways, noticed he was breathing and moved him into the recovery position, according to the report.

Police continued to monitor the child until Painesville City Fire Department arrived to provide treatment. He was then transported to the hospital.

Painesville police announced in a June 16 Facebook post that Moctezuma was released from the hospital and has made a full recovery. Officers Thompson and Tyecast reportedly visited the boy’s home after he was discharged from the hospital to give him toys and police memorabilia.

“Paolo’s parents, Jose and Anna, were emotional speaking with the officers and expressed their sincere gratitude for the police and EMTs who helped save their son’s life,” police said in the statement.

“Without the 911 callers and the responding officers’ quick responses, this near tragedy would have a much different outcome.”