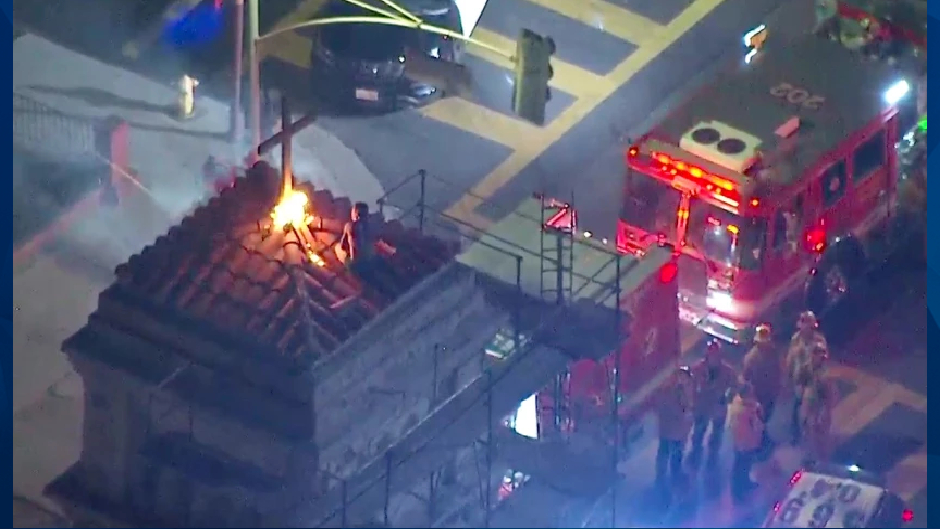 California police arrested a man on Wednesday for climbing on top of a church and setting the roof on fire.

According to an alert from the Los Angeles Fire Department, crews responded to reports of someone on top of St. Mary’s Catholic Church in Boyle Heights who appeared to be trying to set the four-story building on fire. The Los Angeles Times reported that the 25-year-old suspect — who was only wearing underwear and a single sock — lit a small fire at the base of the rooftop cross, but it did not spread.

Video footage appears to show the unidentified man with a pillbox in his mouth. After setting the fire, the man was seen climbing down the church’s scaffolding and jumping onto the roof of a nearby building. At some point, he was spotted climbing an electrical wire, KTLA reported.

A security guard told KCBS that he tried to convince the man to climb down as the suspect threw items at police officers.

The guard said he overheard the man repeating, “I don’t want to do it.”

Once the man made it to the ground, he allegedly forced his way into a residential building by breaking a window. Officials said a family inside the building was evacuated, according to the Times.

Less than an hour later, police officers arrested the man and he was transported to the hospital.

The suspect, who has not been publicly identified, was arrested on suspicion of arson and burglary. KTLA reported that fire officials remained at the church as an arson investigation is underway.