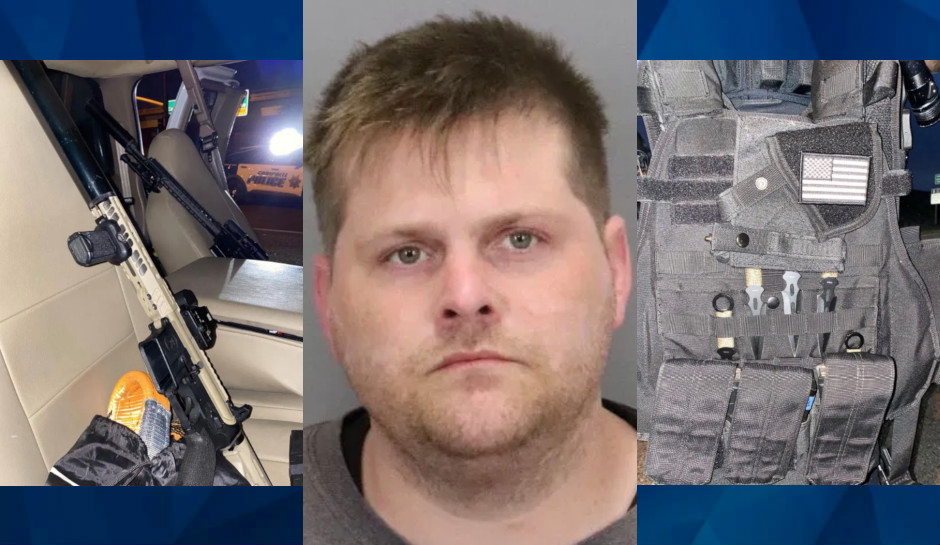 Wesley Charles Martines, 32, was arrested on July 9 in Campbell, a Silicon Valley city just outside San Jose, police said. The criminal complaint against him lists seven felony charges, including possession of assault weapons, a silencer, illegal drugs, and a pipe bomb that was filled with pellets but lacked explosive material, the Mercury Sun reported. He was arraigned this week and ordered held on a $300,000 bail.

“There’s a lot of evidence to unpack still, but based on what we have seen thus far and what was recovered in the car, we believe that this person was going to commit some sort of violence against the community,” Campbell police Capt. Ian White said Thursday. “We believe we prevented a tragic incident from occurring.”

The investigation began just after midnight on July 9 when a Campbell business owner monitoring his security cameras saw a man looking into vehicles on a car lot and opening a storage shed to look inside. The businessman called police, thinking a burglary might be in progress, White said.

Officers soon spotted Martines’s white Ford F-250 pickup truck and initiated a traffic stop. One of the officers saw what appeared to be a rifle in the backseat, and asked Martines about it. After Martines claimed it was a pellet rifle, the officers ordered him out of the truck and patted him down, finding a loaded handgun magazine in his pants pocket.

Martines, who was described as soft-spoken and calm in the police report, told the officers he “just wanted to look at the price of one of the cars on the lot and denied opening a storage closet on the property” and said he’d been at a firing range earlier in the day. He told them he’d found the pipe bomb in a pile of scrap metal at a neighbor’s home, saying it “looked out of place and weird.” He told the officers he unscrewed one of the caps, looked inside, and screwed it back on.

Ultimately, police searching the truck found two illegal AR-style rifles, both with a silencer or a suppressor, a Glock 9mm handgun within reach of the driver’s seat, body armor with rifle-resistant plating and pockets stuffed with loaded rifle magazines and throwing knives, and personally-inscribed bullets with messages, KTVU reported. Those messages included “To: Widow From: Grim Reaper,” “First of many,” “Heard around the world,” and “A good start” in addition to “Cop Killer.”

Some of the magazines were said to be illegal, high capacity clips. Officers also seized heroin and methamphetamine from the truck.

And then there was the manifesto. The document contained “violent scenarios/fantasies” and racist and anti-Semitic writings, according to Campbell police and the Santa Clara County District Attorney’s Office. The document also detailed a plan to go into a sporting goods store, dressed as an employee, and restrain everyone inside. Authorities did not say what his plans were after that.

Martines is due back in court on July 21, according to jail records.