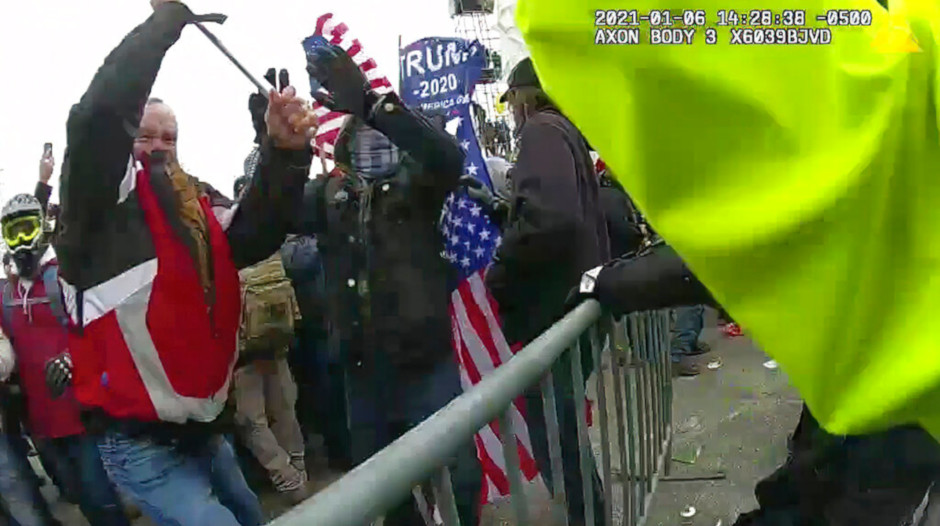 Online sleuths identify alleged attackers, neither of whom have been charged related to the insurrection.

The family of a Washington, D.C., police officer who died by suicide after the January 6 insurrection has filed a lawsuit against two men believed to have attacked him during the riot, leading to a traumatic brain injury.

Officer Jeffrey Smith took his own life on January 15, the second officer to do so since the insurrection, as CrimeOnline previously reported. Two other officers have died by suicide since that time.

The Washington Post said that Smith, a 12-year veteran of the Metropolitan Police Department, shot himself to death the day after he had been ordered to return to work.

The lawsuit includes an affidavit from former D.C. Medical Examiner Jonathan L. Arden, who said the injuries Smith received during the riot were a “precipitating event that caused the death of Officer Smith.”

The family’s attorney, David Weber, told the Huffington Post that he contacted the online sleuthing group Deep State Dogs for help in the case. The group uncovered a video showing Smith — identified by his badge number on his helmet — fighting rioters outside the Speaker’s Lobby.

The man they identified as Smith’s attacker is seen “violently” swinging a heavy object like a cane or a crowbar at Smith’s head after another man, also identified by the group, hands it to him. Smith’s visor was up at the time, and Weber told the Washington Post he believes the attacker targeted him because of that.

“You can see Jeff go down,” Weber said.

The lawsuit names the two men (the second in an amendment filed on Saturday), but CrimeOnline is not because neither has been charged with a crime, and we are unable to positively identify them as Smith’s attackers. One of the men — the one reportedly seen swinging the cane at Smith — has told a reporter he was at the riot. Weber said he has turned over the information uncovered by Deep State Dogs to federal investigators.

The lawsuit accuses both men of assault and battery and wrongful death and seeks a $2 million judgment and punitive damages of $5 million.