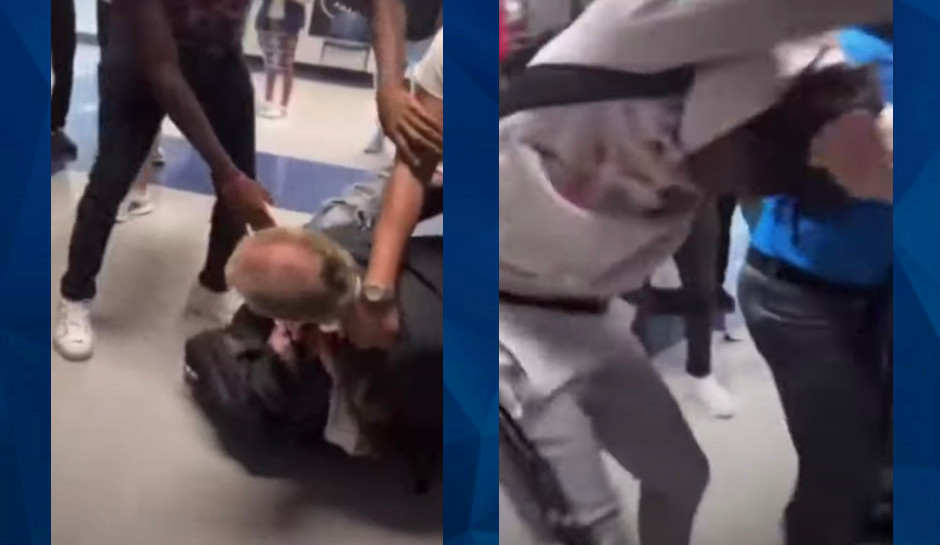 A 16-year-old Kentucky high school student has been suspended over a physical fight with a teacher — who has been pulled from the classroom while the school district investigates.

Jamir Strane told WDRB he was the student involved and that he started the fight, and he also believes the teacher, identified as Marion C. Moore School chemistry instructor William Bennett, went too far.

“I look at that as getting revenge, because you didn’t have no reason to keep pulling my hair,” said Strane. “Even as a student is trying to pull you off of me, and you’re still fighting me.”

Viral video of the incident does not show the beginning, but Strane said it started with comments Bennett made about the neck gaiter he was wearing as a COVID mask — comments that triggered a response born from being wounded in a drive-by shooting while sitting on a patio with friends last year.

“He said, ‘You’re just going to be another Black boy shot,'” said Strane. Bennett told the student he couldn’t come into his classroom with the mask and added that he’d “end up in the streets dead” like all his friends, the boy said.

In the video, Bennett is fully on top of Strane, pinning him face up to the floor while other students try to pull him off. Strane punches at Bennett while the students also try to hold his arms back. A staff member arrives and pulls Bennett off, but he tries to knee Strane in the face and grabs his hair, holding onto it even while the other staffer is trying to keep him away from the student.

“So right now exactly what happened is being reviewed, it’s being looked at, and while that review is taking place, we know the teacher will not be in the classroom,” said Renee Murphy, a spokesperson for Jefferson County Public Schools. “The review will talk to witnesses and they will gather more information about any kind of verbal exchanges that took place.”

Strane, meanwhile, has been suspended for 10 days and charged with assault.

“I understand I was in the wrong, but you don’t have a right to put your hands on me,” Strane told WAVE3.

Erica Strane, the teen’s mother, said she is looking for a lawyer to fight the charge.

“To be told that you’re just another boy that’s going to be shot dead, I could see where that could trigger his PTSD,” his mother told WDRB. “Like I said, my son — he’s not a saint. He has his flaws. But, again, I can understand where the PTSD was triggered.”