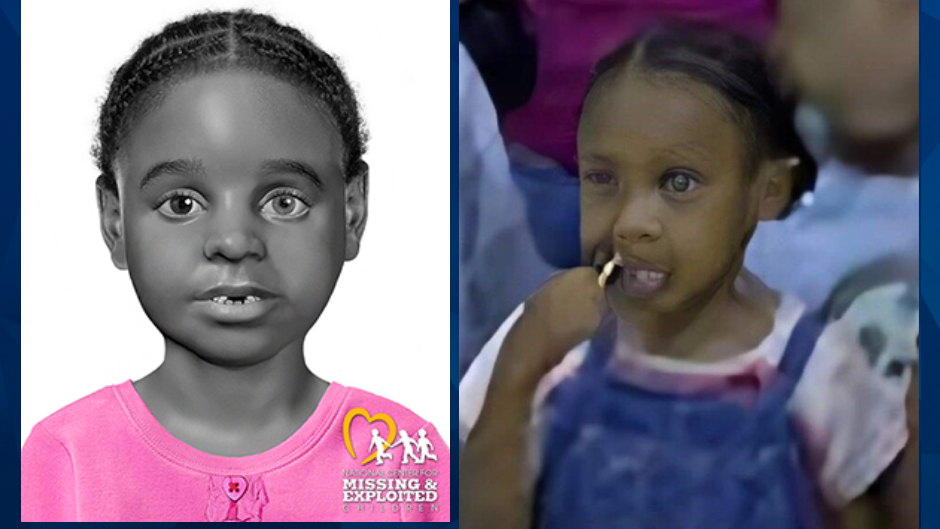 Do You Know Her? New Images of ‘Opelika Jane Doe,’ Whose Remains Were Found in 2012

Last week, the National Center for Missing and Exploited Children publicized new images of an unidentified girl who was found deceased in Alabama in 2012.

The organization said an anthropologist from the Smithsonian Institution was brought in to create the new pictures, which may show what “Opelika Baby Jane Doe” looked like before her death.

The unknown girl’s skull was found behind a mobile home in Opelika in January 2012. Since then, investigators determined that the girl suffered long-term abuse which left her blind in one eye and scarred until her death sometime between 2010 and 2012.

“Based on feedback from experts, we believe that she could not see out of her injured eye and that injury could have occurred months to a year before her death. … This information is vital because we know that the injury was visible to anyone who interacted with the girl and may play a crucial role in identifying her,” Opelika police Sergeant Alfred White said in a statement issued to WIAT.

Baby Jane Doe was between 4 to 7 years old when she died. She had medium-length black hair which was styled in tight curls. While evidence indicates the girl was malnourished, police said her weight, height, and eye color were undetermined.

According to WIAT, a chemical isotope test that was performed on her bones determined she was born and raised in Alabama or a neighboring state. Investigators reportedly suspect the girl may be from Orlando, Florida.

In 2016, Opelika police released photos, which show who they believe is the deceased girl at the Opelika’s Greater Peace Baptist Church Vacation Bible School in 2011 — approximately three miles from where the remains were found. A teacher at the school reportedly provided the pictures to authorities.

Last year, those photos were enhanced to more clearly show the unidentified girl with one disfigured eye. The bible school teacher who gave the photos to cops said the enhanced images bore more of a resemblance to Baby Jane Doe.

White said their department continues to investigate this case. Anyone with information should call the Opelika Police Department at 334-705-5200.