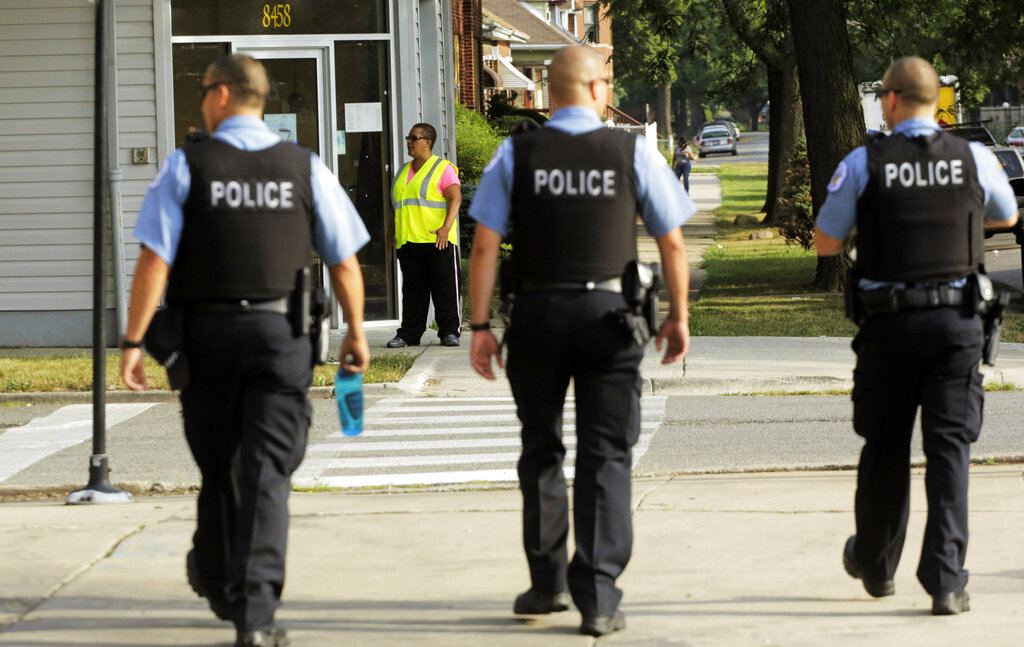 Chicago Police Officer Shot in Face During Confrontation with Suspect, Returns to Precinct in Hospital Gown

A police officer in Chicago was shot in the face Monday after a suspect fired multiple rounds at him, WBBM-TV reports.The incident occurred around 3:30 p.m. at a busy shopping center in the Lincoln Park neighborhood outside an Ulta beauty store.

According to WBBM-TV, someone flagged down an officer to report a person acting erratically inside the store, and when the officer got to the scene, a struggle ensued that spilled out into the parking lot.

A male suspect then fired three shots, striking the officer once in the left side of the cheek.

Officers detained the suspected shooter and no officers fired back at the suspect, according to the television station.

It was not exactly clear what happened that prompted police to intervene, but Brian Hopkins, who represents the area on the city council, told reporters at a press conference that the gunman and someone with him were not wearing masks in compliance with COVID-19 protocols.

“We do know that the offender and the person he was with were not wearing masks, and there was some type of confrontation,” Hopkins said, according to WBBM-TV. “It’s too early to say if that confrontation was the result of them not wearing a mask.”

There had been other incidents in the area before the shooting and police had stepped up patrols, according to WGN-TV. The Ulta store in particular has been targeted previously by an armed shoplifting ring.

“We’ve been doing a lot of patrols in this area – just extra patrols – and so we were really close when the call came out,” police Supt. David Brown said at the press conference, according to WBBM-TV. “There have been some incidents in this area that include the Ulta – some burglaries – but nothing as serious as violence.”

Hopkins expressed outrage that the shooter fired at the officer.

“The good news is the officer’s injuries are not life-threatening, but let’s pause and reflect on the fact that it is life-altering,” Hopkins said at the press conference, according to WGN-TV. “Getting shot in the face is no small matter – even if you’re going to live from those injuries, and even if you’re going to fully recover from those injuries – and let’s pray that he will.”

A woman who lives near the scene said at a press conference that she heard the gunshots. She said Monday’s incident gave her “chills.”

After being treated at Advocate Illinois Masonic Medical Center for non-life-threatening injuries, the injured officer left the hospital and returned to the Near North District police station wearing a hospital gown, where fellow officers saluted him, WLS-TV reports. The officer then went home.

The shooter remains in custody and investigators were interviewing a woman who was with him at the time of the shooting.