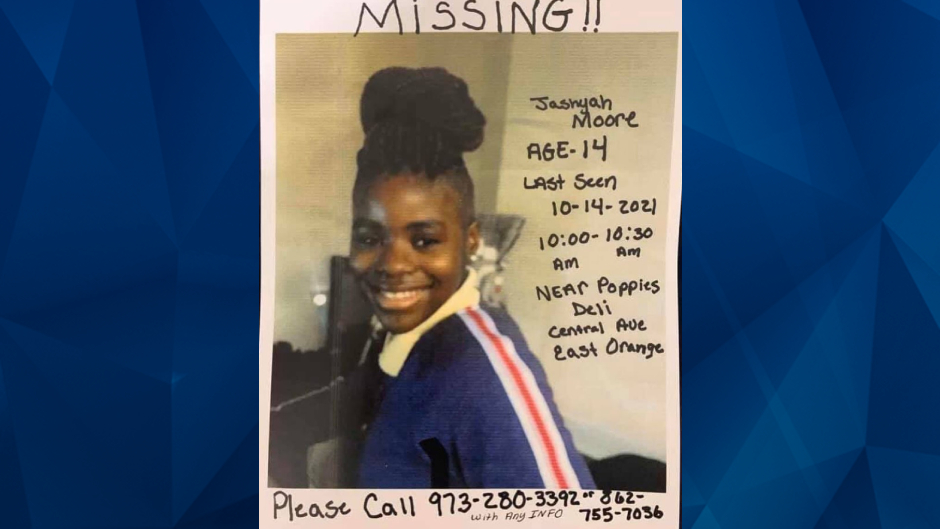 A 14-year-old is still missing two weeks after she was last seen at a New Jersey deli, according to reports.

WPIX reported that JaShyah Moore went to two markets in East Orange on October 14 — Poppie’s and U.S. Food Market. Her mother said her daughter first went to U.S. Market that morning to purchase paper towels and juice, but she came back home because she lost the card to purchase the items.

Moore’s mother said she instructed her daughter to go back and retrace her steps. She became concerned when the teen did not return within the hour, as the deli was located a block from their home.

Moore’s mother searched for her daughter and reported her missing before dark. The teen does not own a cell phone, WPIX reported.

According to the news outlet, Moore’s family was originally unaware she had gone to Poppie’s on October 14. Police said they obtained surveillance footage showing her at that market the day she vanished.

A local salon owner reportedly told Moore’s mother that the teen appeared sad the morning of her disappearance. Further, workers at U.S. Market revealed to WPIX that a male was with Moore and had paid for her items — with one of the employees noting the male was wearing a mask.

Moore’s aunt said the teen’s estranged stepfather is an East Orange police officer who is facing an assault charge for an incident last year in Irvington. The aunt suggested the victim in this case was her niece, but it is unclear whether that was Moore.

“I saw him punch my niece twice in the face,” the aunt told WPIX. “And this guy’s in his 30s. And he’s really tall and he’s really big.”

Moore’s mother said she received a letter that the case was going to a grand jury.

The aunt told WPIX, “I find it extremely convenient and coincidental that my niece goes missing a couple weeks later.”

However, Essex County prosecutors told WPIX that they do not believe Moore’s disappearance is connected to the criminal case.

“The missing person’s case is being handled by municipal authorities in East Orange,” wrote Katherine Carter, the prosecutor’s office’s public information officer. “At this point, the domestic violence assault and the status of the missing person do not appear to be related; however, it is being monitored by law enforcement.”

Anyone with information regarding JaShyah Moore’s whereabouts is asked to call the East Orange Police Department at 973-266-5041.