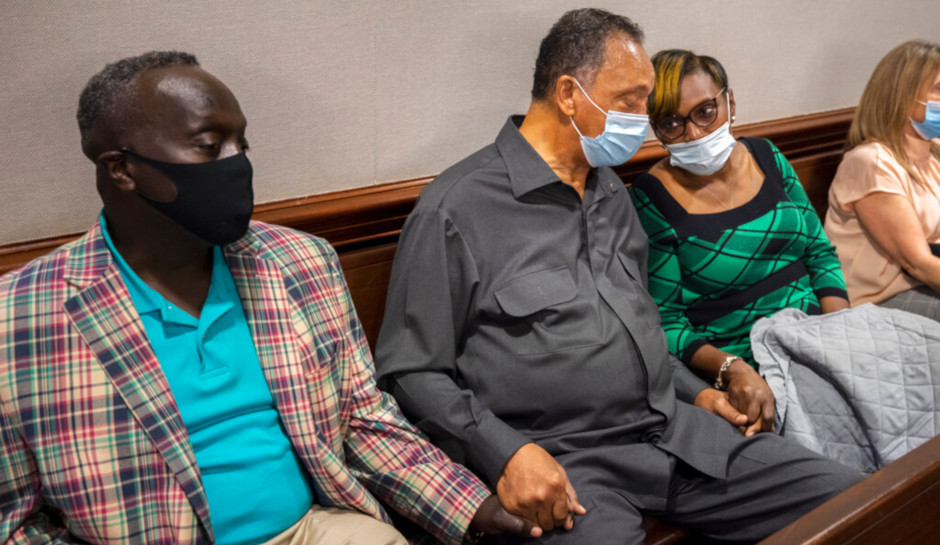 The attorney for one of the men charged with killing Black jogger Ahmaud Arbery asked a judge Monday to toss the Rev Jesse Jackson from the courtroom.

Gough later apologized, saying his argument was “overly broad” but returned to it Monday when Jackson was sitting with the Arbery family in the back of the courtroom.

“How many pastors does the Arbery family have?” Gough said Monday said after the jury had been escorted out, according to Reuters. “The seats in the public gallery of a courtroom are not like courtside seats at a Lakers game.”

Gough said the presence of “an icon in the civil rights movement” could intimidate and influence the 11 white members and one black member of the jury.

Reuters said that Judge Timothy Walmsley “was audibly exasperated” as he again rejected Gough’s motion. He told the attorney he would not issue any blanket bans on who could or could not enter a public courtroom and said that he was unaware of Jackson’s presence until Gough pointed him out.

He also said he found it odd that Gough had now twice objected to Black pastors in the courtroom, adding that he was “done talking about it.”

“At this point, I’m not exactly sure what you’re doing,” the judge said. “It’s almost as if you’re just trying to keep continuing this for purposes other than just bringing it to the court’s attention, and I find that objectionable.”

Outside the courthouse, Jackson suggested Gough was “looking for diversion” and said he’d be at the trial all week, calling it “a constitutional right and a moral obligation.”

Bryan and two of his neighbors, father and son Gregory and Travis McMichael, are charged with Arbery’s February 23, 2020, death in Brunswick, Georgia’s Satilla Shores neighborhood. The McMichaels and Bryan chased Arbery around the neighborhood in their trucks, while Bryan filmed, until they finally boxed him in. Arbery tried to run around the McMichaels’ truck, but Travis McMichael got out with a shotgun. The two tussled, and McMichael shot Arbery twice in the chest, killing him on the street.

The three white men claimed they were trying to conduct a “citizens arrest” because they thought Arbery was responsible for several break-ins in the neighborhood. But police said they had record of only one break-in — on January 1, when a 9mm handgun was reportedly stolen from an unlocked truck outside the McMichaels’ home.