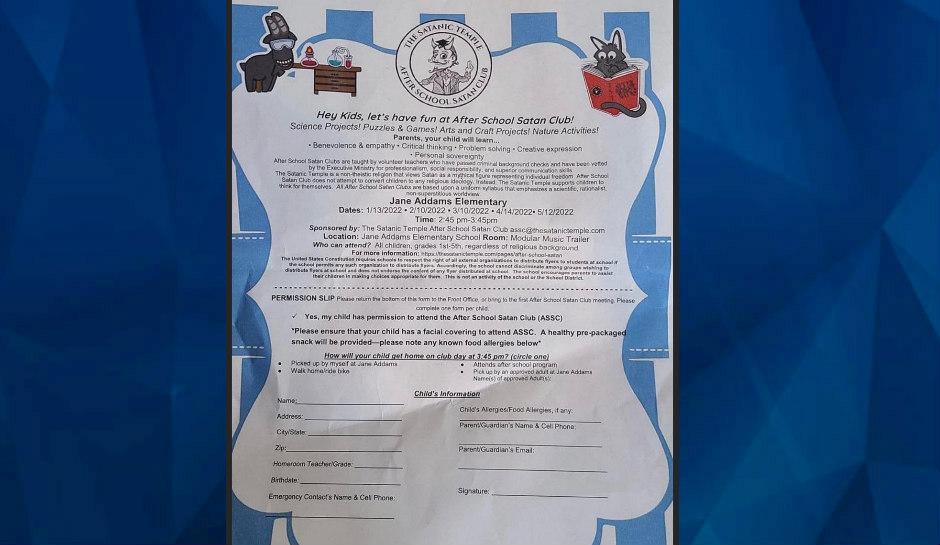 A public school district in Illinois is coming under fire after hosting an “After School Satan Club” sponsored by Satan worshippers.

The program was slated to start Thursday at The Jane Addams Elementary School in Moline, KWQC-TV reports.

Volunteer organizers from the Satanic Temple of the United States say they are not seeking to convert children to Satanism, but rather, facilitate fun projects involving games, outdoor activities, puzzles, arts and crafts that promote critical thinking and benevolence.

“Proselytization is not our goal, and we’re not interested in converting children to Satanism,” the temple states on its website. “After School Satan Clubs will focus on free inquiry and rationalism, the scientific basis for which we know what we know about the world around us.

“We prefer to give children an appreciation of the natural wonders surrounding them, not a fear of everlasting other-worldly horrors.”

The school district said it is legally required to allow the club to host meetings because of a 2001 U.S. Supreme Court decision that held it was unconstitutional for public schools to prohibit clubs from organizing just because they are religious in nature.

The school already allows an evangelical group called The Good News Club to meet at the school. Prohibiting the satanic club could be viewed as viewpoint discrimination, Moline-Coal Valley Schools Superintendent Rachel Savage told parents in a letter.

“To illegally deny their organization (viewpoint) to pay to rent our publicly funded institution, after school hours, subjects the district to a discrimination lawsuit, which we will not win, likely taking thousands upon thousands of tax-payer dollars away from our teachers, staff, and classrooms,” Savage wrote in the letter.

No teachers are participating in the club.

Parents grew concerned after flyers for the Satan Club were posted at the school. The flyers advertised the club as open to first through fifth graders and states that the club will meet once per month through May.

Members of the community expressed diverging viewpoints on the issue.

“This proves just how lost our country is,” one person wrote in a comment to WQAD-TV.

Another individual told the television station: “I love it! Freedom of religion doesn’t just mean Christianity.”

“Satanists should actively work to hone critical thinking and exercise reasonable agnosticism in all things,” the website states. “Our beliefs must be malleable to the best current scientific understandings of the material world — never the reverse.”

Thursday’s gathering drew some protesters at the school who held signs quoting biblical verses, according to WHBF-TV.