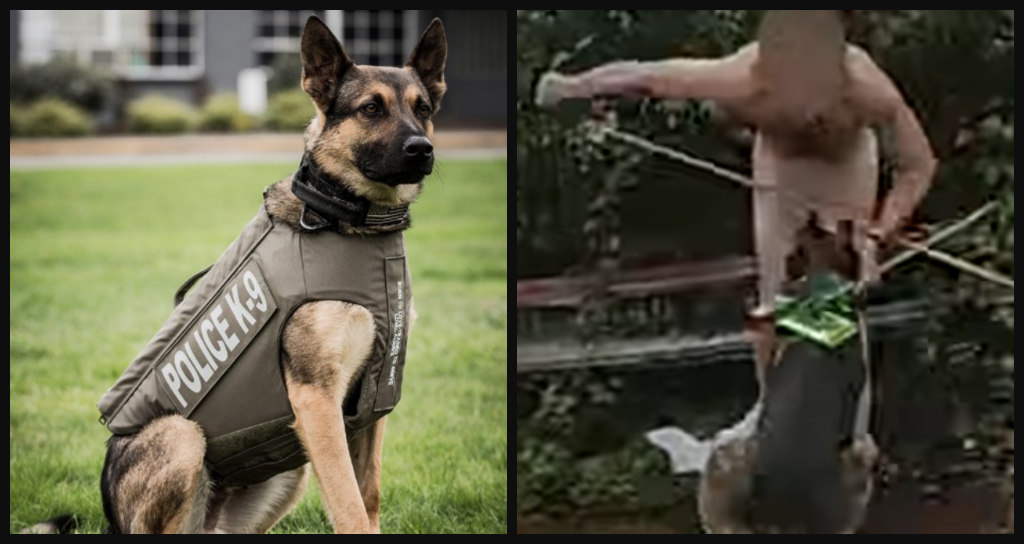 The conflict resulted in the suspect fatally stabbing a police dog and cutting an officer’s face, and police fatally shooting the suspect, whose identity has not yet been released. The incident occurred on January 5, when authorities received a 911 call at 2:12 p.m. about a man with a knife who was attempting to break into a home on South Eddy Street in Seattle.

“I’ve got an intruder in my house,” the male caller told a dispatcher, according to the Seattle Police Department. “He’s threatening me with the machete.”

Arriving officers found what appeared to be the suspect walking along a street with only a towel wrapped around his body. Another man was walking behind the suspect with a baseball bat in an apparent attempt to chase him out of the neighborhood.

A police officer with a K9 unit then begins following the suspect, who starts running away, and a police sergeant tells the suspect multiple times to stop.

This stops the suspect, who then begins stabbing Jedi multiple times before thrashing at the K9 officer, cutting his face. A third officer opens fire and shoots the suspect seven times.

Jedi and the suspect died at the scene. Medics brought the injured officer to the hospital.

Investigators are examining whether the suspect may have been mentally ill or was on any drugs at the time of the incident.

On Monday, the Seattle Police Department held a memorial for the dog, which had served the community for five years. The dog was one of the department’s best K9 units, KING-TV reports.

“He and his handler/partner were involved in many successful tracks, searches and apprehensions over five years serving the people of Seattle. This is a loss not only for SPD, but for our community,” the police department tweeted.