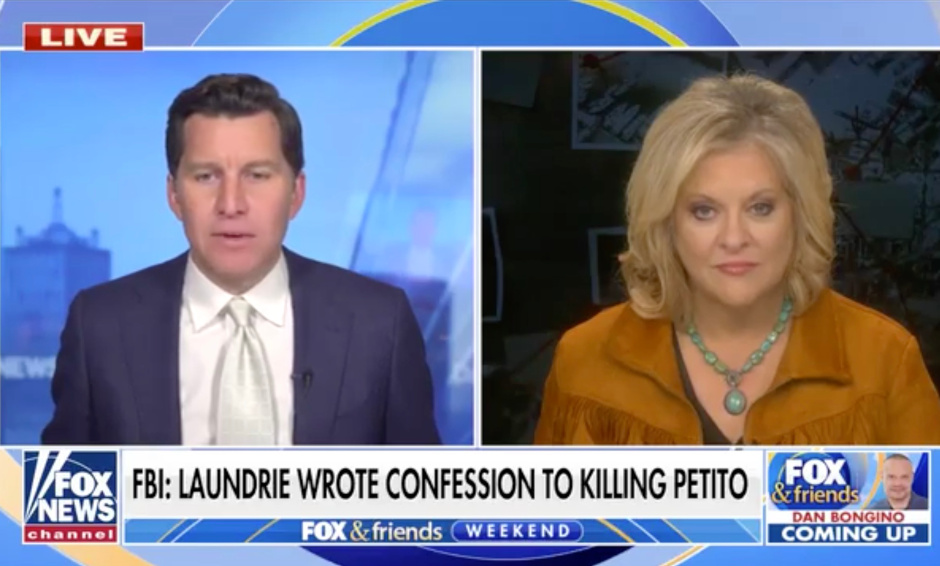 CrimeOnline’s Nancy Grace praised the work of the FBI in bringing the Gabby Petito case to its conclusion but told Fox News on Saturday that Brian Laundrie’s “self-absorbed, self-serving musings in his notebook … means nothing to me.”

The FBI’s Denver field office announced on Friday it was closing the case after its months-long investigation led to the inescapable conclusion that Laundrie killed Petito while the pair were on a cross-country van trip, then drove home alone without her — only to flee and kill himself as the investigation heated up, as CrimeOnline previously reported.

Federal agents, Grace said, did “incredible work” bringing Laundrie’s notebook back to life after it had been submerged in the tannic water of a flooded Florida swamp for more than a month.

“Let’s talk about what’s inside, reportedly a confession,” she said. “Know what? Day late, dollar short.”

“If this guy had really been remorseful, he would not have dragged Gabby’s parents through H E Double L, to the gates of hell, for three weeks, wondering where’s their daughter,” Grace added. “Is she dead? Is she alive? Is she stranded? Can I get to her? Can I help her? Oh. No. He bludgeoned her in the head and throttled her as she gasped for air until she was dead. So he can write whatever he wants to.”

“And I just want to highlight, please let me highlight: Domestic abuse turns to murder. That’s what happened here.”

Grace also discussed possible repercussions for Laundrie’s parents, Chris and Roberta Laundrie, “who did nothing to help Gabby Petito’s parents in their suffering looking for their daughter.”

“They knew where their son was,” she said. “They knew he came home in Gabby’s van without Gabby. They knew something horrible had happened, yet they left the parents hanging in the wind and they did not help police.”

But, she said, “not helping, not volunteering, not being a good citizen or even a good person, for pete’s sake, is not a crime in our country. There must be an active doing. They have to actually physically do something. Lie, obstinate, something of that nature.”

Grace noted that the Laundries did nothing like that “that we know of …  and even if they did, I doubt it could ever be proven.”