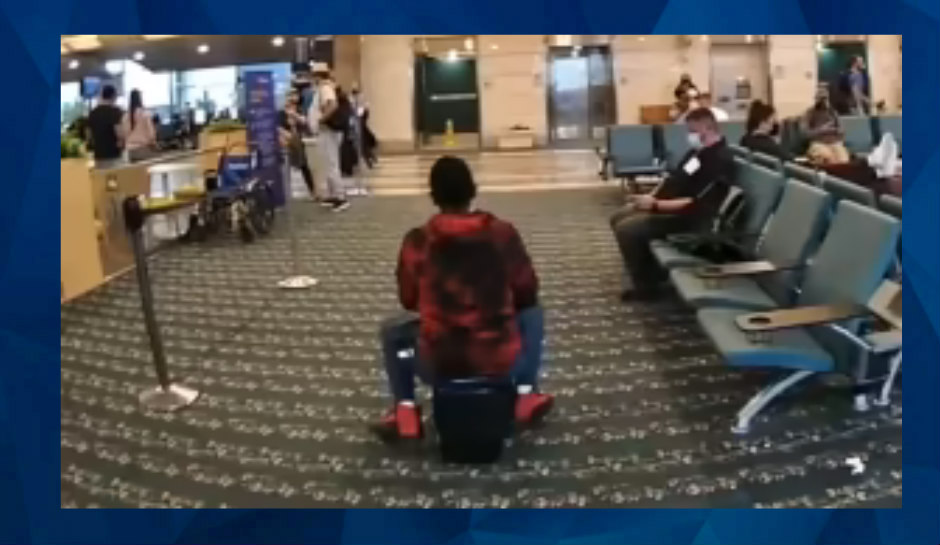 A drunk woman led police on a slow-speed chase through the Orlando International Airport while riding a motorized suitcase in a bizarre incident captured on police body cameras, WKMG-TV reports.

Video of the interaction, which occurred in April, was recently obtained and broadcast by the television station. The kerfuffle started when Southwest Airlines would not let 32-year-old Chelsea Alston on a flight to New York because she appeared intoxicated.

Alston claimed to have had only two drinks, but she allegedly could not stand up straight, reeked of alcohol and had glassy eyes.

“I don’t want no beef. I’m just trying to go home and enjoy myself,” Alston can be heard saying in the recording.

Orlando Police Officer Andrew Mamone told Alston that the airline was allowed to bar her from the flight given her condition, and he suggested that she just leave the gate and wait for a bit until she became sober again.

“It’s OK. You just need to go over to the terminal and sober up a little bit. Get another flight,” Mamone told Alston, according to the recording.

That did not sit well with Alston. Shortly thereafter, Alston can be heard cursing at Mamone and waving her middle finger as she rolled away atop her motorized suitcase.

Mamone, unfazed, walked to a bike and then began to follow Alston through the airport.

“Oh man, that thing kind of goes fast,” Mamone can be heard saying in the recording as nearby travelers laugh at the absurdity of the situation.

Moments later, Mamone caught up to Alston in a tram. The two exited the tram and Mamone asked that Alston follow him so they could go to the airport’s unsecured area.

“I just need you to get on the other side of TSA [security checkpoint],” Mamone told Alston in the recording. “Follow me, and we’ll roll out together.”

Seeking to de-escalate the situation with humor, Mamone suggested a competition.

“Chelesa, I’ll race ya,” Mamone said in the recording, adding that he would leave her alone as long as she left the secured area of the airport.

However, Alton remained uncooperative and Mamone warned her that if she did not leave the secure area she would be arrested.

Alston then appeared to spit at Mamone, according to the video, prompting him and another officer to put her in handcuffs, at which point she allegedly spit again.

“Stop spitting,” Mamone told Alston, according to the video.

“I only spit one time,” Alston responded.

The officers physically escorted Alston through the airport, in part sliding her on the floor because she would not cooperate, and placed her inside a police car.

An arrest report obtained by WKMG-TV states that once Alston was in the police car, she allegedly ripped the vehicle’s fabric and defecated in the seat, which caused approximately $1,200 in damage.

Authorities eventually released Alston on a $13,500 bond from the Orange County Jail.

Alston has pleaded not guilty to charges of battering a police officer and damaging a patrol vehicle. If convicted, she could be sentenced to up to five years in prison on each charge.