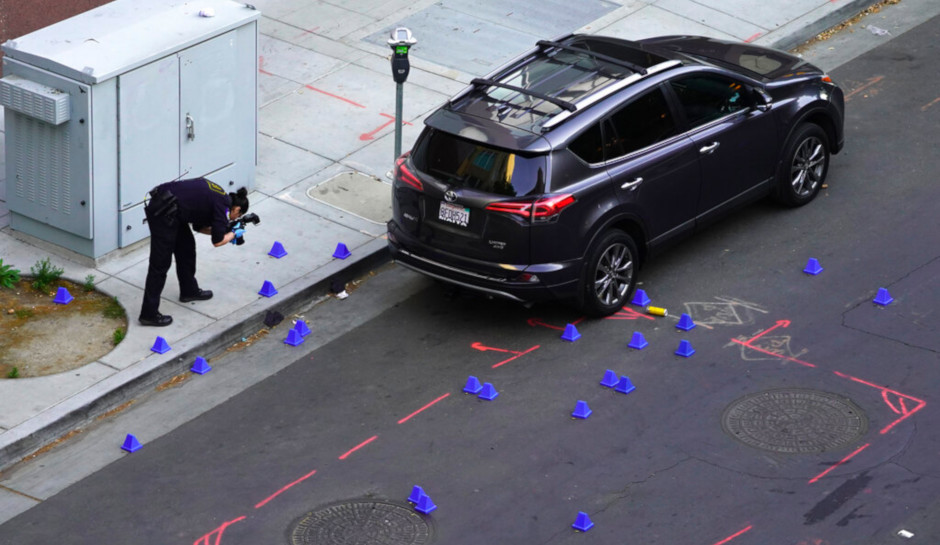 Police have not determined what sparked a deadly shooting in the streets of Sacramento early Sunday morning, a terrifying incident that left six people dead on the roadways amid blood and glass.

Sacramento Police Chief Kathy Lester said that three men and three woman had died, according to KXTV, and that the shooting broke out after a large fight — although it’s unclear how the fight was related to the shooting.

Twelve others were wounded and taken to hospitals, Sacramento police said.

Seven of the wounded were transported by emergency services, and four of those were listed in critical condition.

Police said a stolen handgun was found on the scene, but but no suspects were in custody. Late in the afternoon, investigators confirmed that several shooters were involved.

Lester said it was “a very complex and complicated scene,” and the Sacramento Bee noted that investigators were covering a two-by-four block area on 10th Street from K to L and at 12th and K Streets.

“Right now our investigators are arriving at the scene,” she said several hours after the shooting. “This is very preliminary.”

Police set up a website for witnesses to upload videos and photos of the scene, even providing QR codes so the witnesses could reach the site easily.

We are aware of a social media video that appears to show an altercation that preceded the shooting. We encourage any community members with related video to follow the link/QR code below to submit the video to SPD. https://t.co/bQBuBtDM8m pic.twitter.com/pPdrHVkKuX

Police said officers on patrol near the area — a popular section that hosts several nightclubs and is near Sacramento City Hall, the California State Capitol, and Golden 1 Center, the home of the Sacramento Kings NBA team — heard gunshots at about 2 a.m. and responded, finding a large crowd, as CrimeOnline previously reported.

Video posted to Twitter showed crowds of people running from the scene with the sound of rapid gunshots in the background.

According to the Bee, at least two victims had been positively identified by family members, although by Sunday afternoon, no names had been officially released.

Sacramento Mayor Darrell Steinberg and city council members spoke with reporters about a block from the scene.

“This morning our city has a broken heart,” Steinberg said, “This is a senseless and unacceptable tragedy.”

“Our community deserves better than this,” a tearful Councilwoman Katie Valenzuela said.