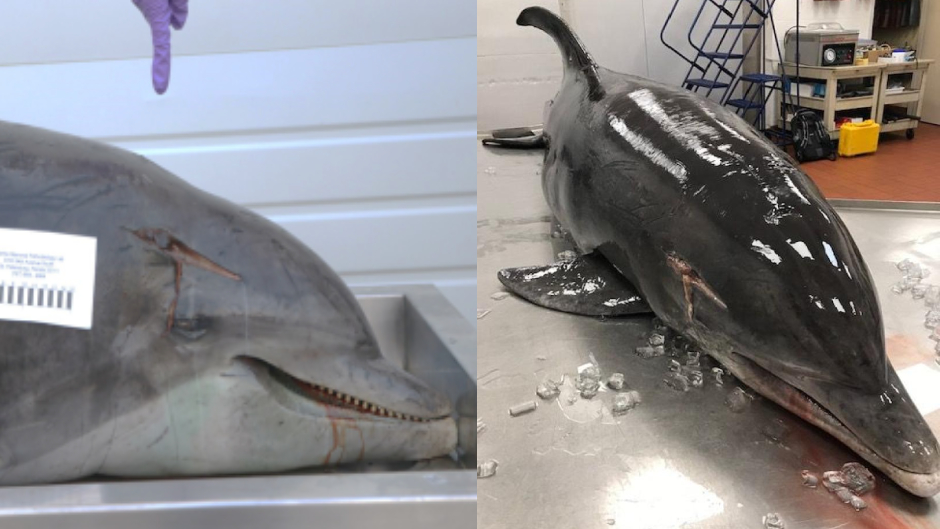 Nursing Mother Dolphin Impaled in Head With ‘Spear-Like Object’ While Being Fed by Beachgoers: Officials

Florida officials are investigating after a dolphin was reportedly found impaled on a beach last month.

The National Oceanic and Atmospheric Administration said in a statement that a necropsy confirmed the bottlenose dolphin — which was discovered on Fort Myers Beach on March 24 — was alive when it was stabbed above the right eye with a “spear-like object.” Officials concluded the dolphin died from trauma.

“Based on the shape, size, and characteristics of the wound, it is suspected that the dolphin was impaled while in a begging position. Begging is not a natural behavior for dolphins and is frequently associated with illegal feeding,” the agency said.

Monica Lynn, a local scientist and dolphin advocate, told the Fort Myers News-Press that the deceased dolphin was a nursing mother. Denise Boyd, a marine mammal biologist with the Florida Fish and Wildlife Conservation Commission, added that the dolphin was 7, which is within reproductive range, and she had milk in her mammary glands.

“What happened to her baby?” Lynn asked.

Boyd told the news outlet that it would be incredibly difficult to find the calf, which can stay with its mother for up to three years while learning how to catch its own food. Officials said the calf’s age is unknown, meaning it is unclear how dependent it was on its mother for survival.

Experts discourage feeding dolphins as they may associate humans and boats with food, which can lead to injury or death.

Anyone with information regarding the dolphin that was found impaled on Fort Myers Beach last month can call the National Oceanic and Atmospheric Administration’s enforcement hotline at 800-853-1964.