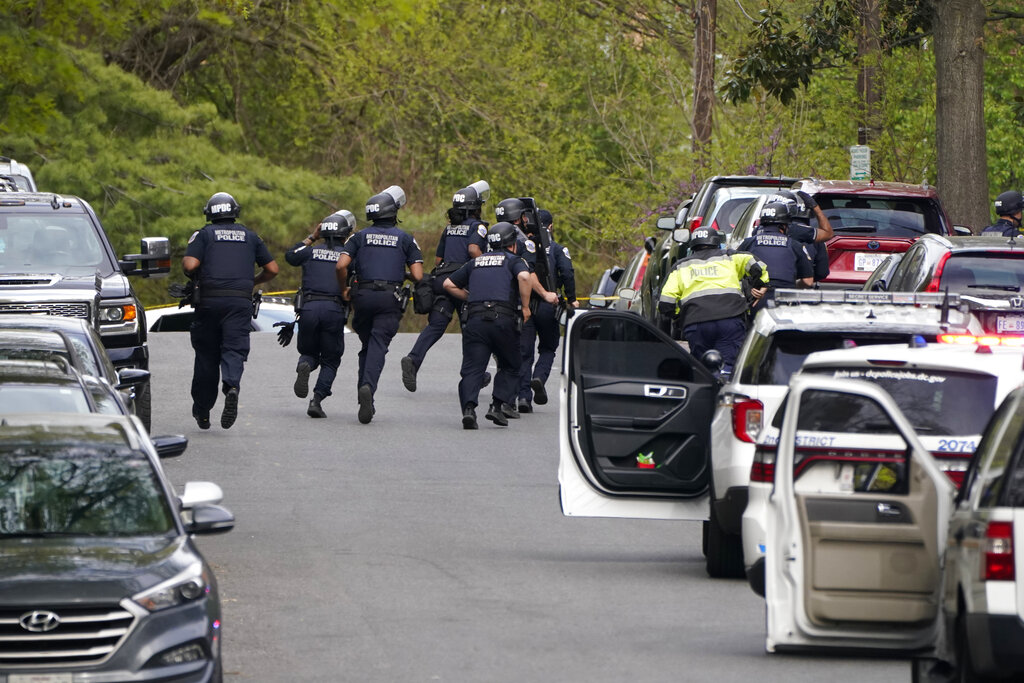 A man suspected of shooting four people in Washington, D.C., on Friday was found dead in an apartment with numerous weapons and ammunition, WUSA-TV reports.

“This was very much a sniper-type setup with a tripod, and this person, obviously, his intent was to kill and hurt members of our community,” D.C. Metropolitan Police Department Chief Robert Contee said at a Friday night news conference, according to the television station.

Investigators believe the suspect began firing on people at random.

One man, who is a retired police officer, and a woman were shot and hospitalized with critical injuries. A 12-year-old girl was also hospitalized with minor injuries, while another woman was grazed by a bullet and did not require hospitalization.

The shooting began around 3:20 p.m. in northwest Washington near Edmund Burke School, a college prep school, and the campuses of the University of the District of Columbia the Howard University Law School.

Schools locked down and a massive law enforcement response descended on the scene.

Patricia Termini, the woman who was grazed by a bullet, told WRC-TV that she was waiting to pick up a student at Edmund Burke School when the gunfire rang out.

“I was waiting in the alley, and all of a sudden there was a burst of what I thought were explosions,” Termini told the television station.

“And then the second burst came, and I laid down in my car, and I called the people whose kid I was picking up, and I said, ‘There’s some explosions or a bomb. I don’t know if it’s shootings or what.’ And at that point a bullet came from behind me and it grazed my shoulder, and I got up, and at that point I said to myself, ‘I need to get out of here.’”

In a video posted to social media, gunfire in rapid succession can be heard in the area where the shooting occurred.

Officers focused their attention on an apartment building and eventually made entry into a fifth-floor unit where the suspected shooter was located.

🚨MPD is seeking the below person of interest in connection to the shooting in the 2900 block of Van Ness Street, NW. This individual is 23 year-old Raymond Spencer of Fairfax, Virginia. 🚨 pic.twitter.com/ziR0Vutw0p

Contee told reporters that the suspect is believed to have committed suicide while offices were making entry into his apartment. Inside, they found six firearms and multiple rounds of ammunition.

“Today, evil reared its ugly head in our community,” Contee said at the press conference, according to WUSA-TV. “People were unnecessarily shot in our community as a result of a senseless act of violence.”

We just spoke with Patricia Termini, one of the victims in the Van Ness shooting. She was grazed in the shoulder by a bullet. She says she was picking up a student at the Edmund Burke School when she heard a burst of gunfire and ducked for cover in her car @nbcwashington pic.twitter.com/ThoGBzJhXA

It is not clear whether investigators have determined a motive for the shooting. Contee told reporters that preliminary information indicates the suspect did not have previous contact with police.

Authorities have not formally named the suspect, but they had identified a person of interest earlier in the day as Raymond Spencer of Fairfax, Virginia. Contee later said at the press conference that after the suspect killed himself, authorities were no longer looking for Spencer, according to The Washington Post.

Online activity indicates that someone using the name Raymond Spencer edited the Wikipedia entry for Edmund Burke School to include detail about the shooting.

Someone with the same name reportedly posted on social media, “Dear God please forgive me,” four minutes after the gunshots were reported to police, according to the Post.

In later social media posts, the user wrote, “They’re in the wrong part of the building right now searching XD” and “Waiting for police to catch up with me,” according to the Post.

Graphic video was also uploaded to the website 4chan that appears to show someone shooting at Edmund Burke School.

Samuel Nicolido, who lives in the neighborhood, said he heard approximately 20 shots.

“It was like five shots and then stopped for like, one minute, and then four more, five more, and then again,” Nicolido told CNN. “I saw cops with shields everywhere and then they were saying, they were telling us to stay at home, don’t leave. So yeah, it was scary.”

The scene was still blocked off by police tape on Saturday morning, according to WUSA-TV.

[Featured image: Police respond near the scene of a shooting Friday, April 22, 2022, in northwest Washington. Police say at least three people were injured in a shooting and city officials are warning people in the area to stay inside because of an “active threat.” Dozens of law enforcement officers responded to the scene near Connecticut Avenue and Van Ness St. in the Van Ness neighborhood of Washington.(AP Photo/Jacquelyn Martin)]