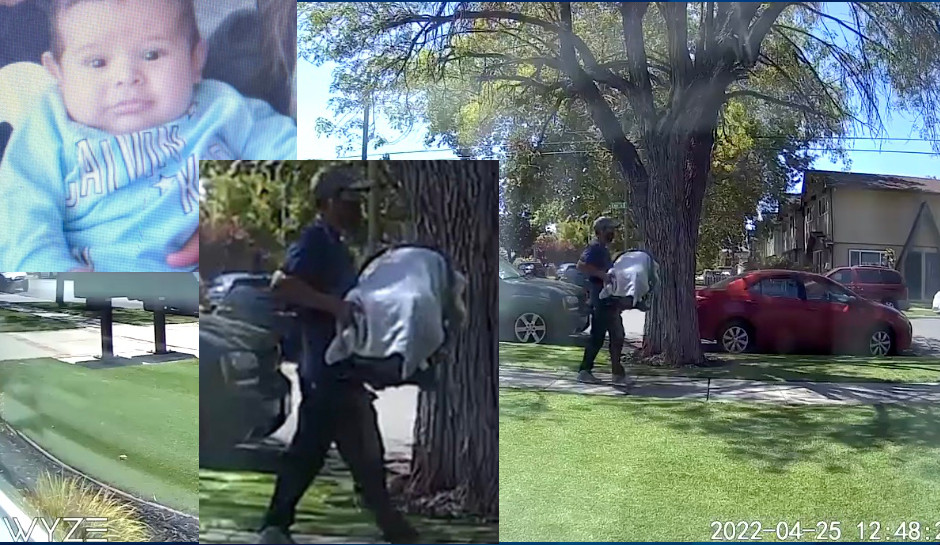 VIDEO: Kidnapper Swipes Baby Out of Apartment, Walks Calmly Away

Federal investigators have joined state and local police in the search for an abducted 3-month-old baby who was taken from his grandmother’s home as she unloaded groceries from her car Monday afternoon.

San Jose police say that Alexis Cuellar was wearing a white, long-sleeved onesie with dinosaurs on it when a man walked out of the apartment carrying the baby in a black baby carrier with a white blanket, KPIX reported.

The man was described as wearing black pants, a dark blue shirt, grey shoes with white trim, a grey baseball hat, and a black facemask. The family told police they do not recognize him.

Investigators said the grandmother was watching over the baby while his mother was at work and took him with her when she went shopping. She returned at about 1 p.m.

“She took the baby in the apartment, went downstairs to unload some groceries, in that short about of time, someone entered the apartment — you guys have the images and the video of this person — and left with the baby,” San Jose Police Sgt. Christian Camarillo told reporters.

The California Highway Patrol issued a missing endangered alert and also a photo of a vehicle that could be linked to the baby’s disappearance. The vehicle is a silver 2011 Nissan Quest with California licenst plate 7HWF353. The vehicle also has a white, circular sticker in the lower left on the rear window.

Detectives said the baby’s father is currently incarcerated and they don’t know that that had anything to do with the kidnapping. They said they will be speaking with him.

“Right now, we have every available resource not only out in the field, but here at the police department working this case,” said Camarillo.

Police are asking residence in the Elm Street are to check surveillance cameras and have set up multiple tip lines for information: