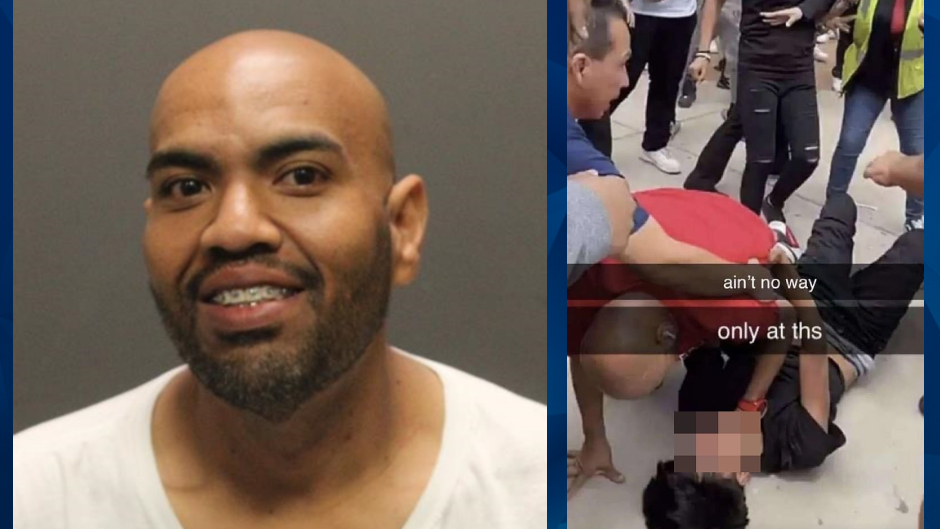 A father and a 15-year-old student were arrested in connection with a fight that reportedly broke out at an Arizona high school on Tuesday.

Willie Smith, 40, was reportedly called to Tuscon High School as his two sons were being sent home for an incident involving other students that occurred a day prior. Smith ignored instructions to leave the school via a back exit at lunchtime, and instead cut through the courtyard, according to the Arizona Republic.

School staff reportedly warned Smith of a possible altercation — to which the father allegedly responded, “If it’s going down, it’s going down here.”

KOLD reported that while walking through the courtyard, there was an exchange between a group of students and Smith’s sons that turned physical. At least 30 students are believed to have been involved in Tuesday’s altercation.

Videos posted to social media apparently show multiple students fighting around Smith, who has a boy pinned to the ground by his neck. Witness accounts and video evidence did not make clear who started the fight.

Tuscon police wrote in their complaint that the Smith had engaged in “mutual combat with a student.” Smith admitted to fighting the student, but he claimed the student had assaulted his son, according to KOLD.

Smith reportedly explained that he did not use the back exit because school staff never told him that his sons did anything wrong to be suspended.

KVOA reported that a 15-year-old boy, who has not been identified, was charged with disorderly conduct and fighting. The Tuscon High student was eventually released to his parents.

Smith was arrested and charged with felony disruption of an educational institution. No injuries were reported and no weapons were involved in Tuesday’s altercation, according to police.