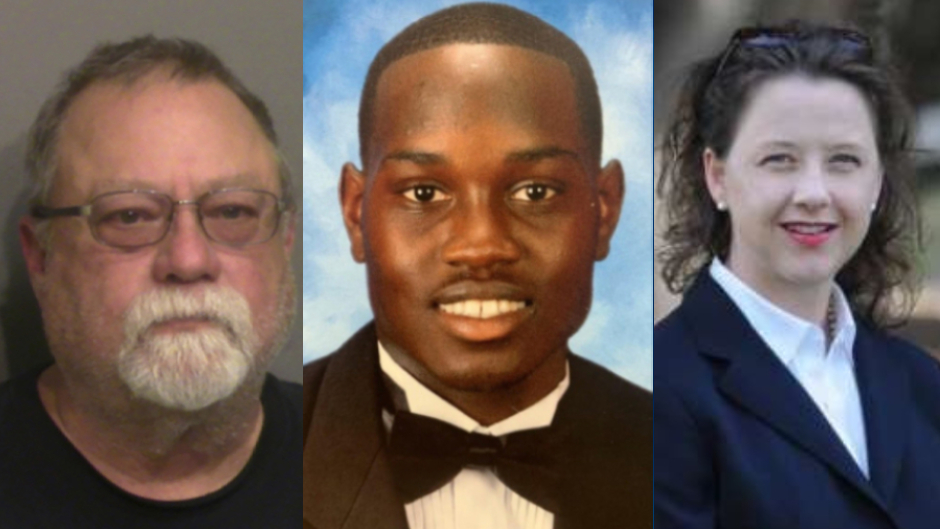 One of the men who murdered Ahmaud Arbery in 2020 spoke on the phone with a Georgia prosecutor 15 times in the weeks following the fatal shooting, officials alleged on Friday.

WSB-TV reported that then-Glynn County District Attorney Jackie Johnson said she had no involvement in the investigation weeks after Arbery’s murder in February 2020. While Johnson’s lawyers have sought to have her case dropped, prosecutors released records indicating that Johnson kept Gregory McMichael informed about the ongoing investigation into Arbery’s death even after she recused herself.

While Johnson immediately recused herself from Arbery’s case due to her link to Gregory McMichael, she allegedly instructed Glynn County police not to arrest Gregory’s 34-year-old son, Travis — who shot Arbery, 25, three times at close range with a shotgun as Arbery jogged through the Brunswick neighborhood. William Bryan Jr., 50, filmed himself chasing Arbery and trapping him with his truck before the fatal shooting.

The elder McMichael, 64, was an investigator for the Glynn County District Attorney’s office for 24 years until retiring in May 2019. Nine of those years were spent working for Johnson.

Previous reports indicated that Gregory left a phone call on Johnson’s answering machine an hour after the deadly shooting. Gregory allegedly asked Johnson to call him as soon as she can as he and his son were involved in a shooting. According to WSB-TV, Gregory and Johnson and Johnson had 15 phone calls between the day of Arbery’s February 2020 murder and the three men’s arrests in May 2020.

In September 2021, Johnson was charged with obstructing and violating her oath of office and hindering a law enforcement officer. She lost her bid for reelection in November 2020, nine months after Arbery’s murder.

A grand jury alleged that on the day of the shooting, Johnson asked Waycross District Attorney George Barnhill to provide legal guidance to Glynn County police. After refusing herself, she allegedly recommended Barnhill to take the case — without disclosing their prior correspondence regarding Arbery’s case.

Johnson was also accused of saying it was not necessary to arrest the McMichaels for Arbery’s murder. Johnson’s alleged comments possibly influenced Glynn County police to hold off on arresting the pair.

Georgia Attorney General Chris Carr said he did not know of Barnhill and Johnson’s conversations when he reassigned Arbery’s case to Barnhill. When Carr reassigned the case, he was reportedly also unaware of Barnhill previously advising Glynn County police that the shooting appeared to be self-defense which had occurred during a citizen’s arrest.

Barnhill also recused himself on April 7, 2020, saying that his son worked in Jonhson’s office and worked a prior case with Gregory McMichael that involved prosecuting Arbery. Reports indicated that Barnhill knew of this conflict of interest early on — but he only resigned from the case following Arbery’s mother’s request to do so.

However, the Attorney General’s Office said Barnhill never disclosed that he was involved in Arbery’s case before it was officially appointed to him. A day after Arbery’s murder, Barnhill allegedly told Glynn County police that he did not see any legal justification in arresting the three men involved in the fatal shooting.

Upon Barnhill recusing himself, the Attorney General’s Office assigned Atlantic Judicial Circuit District Attorney Tom Durden to the case. Barnhill has not been criminally charged for his role in the controversial investigation.

Arbery’s three killers remained free for more than two months after the slayings. However, in May 2020, footage filmed by Bryan depicting Arbery’s murder was released to the public — leading Durden to open an investigation. The McMichaels were arrested two days later while Bryan was arrested weeks later.

In January of this year, the McMichaels were sentenced to life in prison without parole for Arbery’s murder. Bryan received life with the possibility of parole for trapping Arbery with his truck while filming the deadly encounter. The next month, the three men were convicted of violating Arbery’s civil rights and targeting him because he was Black. In April, the McMichaels sought an acquittal of their federal hate crime convictions.

A judge has not yet ruled on Johnson’s motion to dismiss. Bryan and the McMichaels will be sentenced in August for federal hate crime charges.