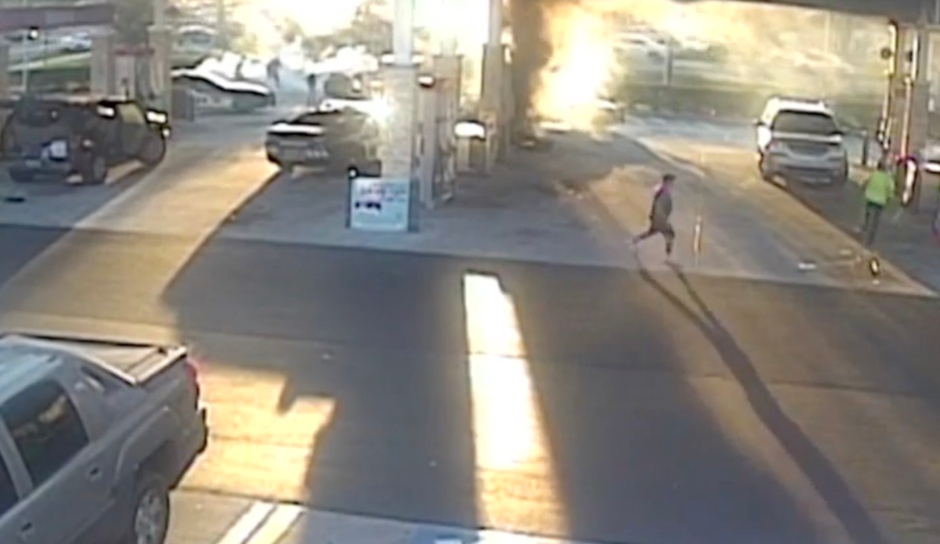 A Florida sheriff’s deputy will be charged with a misdemeanor for firing a taser at a suspect that sparked a massive fireball and left the suspect with burns over 75 percent of his body.

Osceola County Deputy David Crawford was also injured in the February 27 inferno, although he has long since been released from the hospital, while 26-year-old Jean Baretto remains hospitalized, WKMG reports.

The fireball erupted after Baretto, who had been pumping gas into his motorcycle, was knocked over, along with his bike, by deputies and the taser fired. A Fire Marshal’s investigation determined that the taser’s electrical charge likely ignited the blaze.

Osceola County Sheriff Marco Lopez on Thursday said that Baretto will also be charged in the incident — with fleeing and attempting to elude law enforcement, reckless driving and resisting without violence — following the sheriff’s department’s own investigation, according to WESH.

Lopez did not ask the Florida Department of Law Enforcement to investigation because the deputy used a “less lethal” taser in the incident and not a firearm and because he had “full faith” that his department could conduct a fair investigation.

The incident began late on that Sunday afternoon when, according to the sheriff, 911 calls reported men on dirt bikes pointing guns at people on a county road. Deputies arrived on the scene and attempted to pull over a suspect, who fled, Lopez said.

“For the safety of everyone, no one in my department pursued on the roadway,” Lopez said.

Helicopter footage released by the county, however, does show deputies pursuing.

Instead, he said, a helicopter followed the biker, surrounded by other bikers, for about 30 minutes. Lopez said he was seen popping wheelies, driving the wrong way, and running traffic lights. When he stopped for gas — in another county — Osceola deputies pulled in.

“In Osceola County, we have no tolerance for this type of behavior,” he said. “We will identify you and catch you, even if you flee into another county.”

When the deputies attempted to arrest him, Baretto’s bike was knocked over, spilling gas.

Crawford grabs a taser and fires, igniting the blaze, which engulfed both the deputy and suspect.

“He was aware there was gas in the immediate area. He says ‘kill the pump, there’s gas.’ He then grabbed a discarded taser and told the suspect, ‘you’re about to get tased again dude,'” Lopez said. “His actions were reckless and the disregard for life rises to the level of culpable negligence.”

Crawford has been placed on paid leave, Lopez said.

Baretto’s attorneys question the sheriff’s story almost from the start.

Mark NeJame said that Baretto and other bikers were taking part in a tribute ride for a biker who died, WKMG reported. The ride began in Orlando and continued for 18 miles into Osceola County, after which his client headed back home to Orlando.

“Our client drove home to Orlando. If he was fleeing, ask yourself, why would he spend a minute and a half putting gas into his bike, which was only a mile away from his home? Who flees and eludes and stops for gas along the way?” he said.

Instead, NeJame said, surveillance footage shows an Osceola County deputy– who had not requested permission to pursue across county lines — tackling Baretto from behind before firing the taser that ignited the blaze.

Baretto, he said in a Facebook post, was “cooked alive” with third degree burns on his “front and back from his feet to the bottom of his neck” and is still undergoing painful skin graft treatments.

NeJame questioned whether Baretto was even the suspect deputies had pursued in the beginning, noting that he had no gun.

“Jean Barretto is a 26-year-old man, loved by his family,” NeJame said. “A FedEx employee — a valued, a beloved FedEx employee — who has never owned a gun in his life. (Barretto) never had a gun that day, never brandished a gun. But yet, is being vilified while he’s laying, pretty much skinless, in a hospital bed fighting for his life.”

Asked about the possibility of a mistaken identity, Lopez said, “Well, he matched the description.”

Baretto’s attorneys have asked that the FDLE or the US Department of Justice conduct an independent investigation.