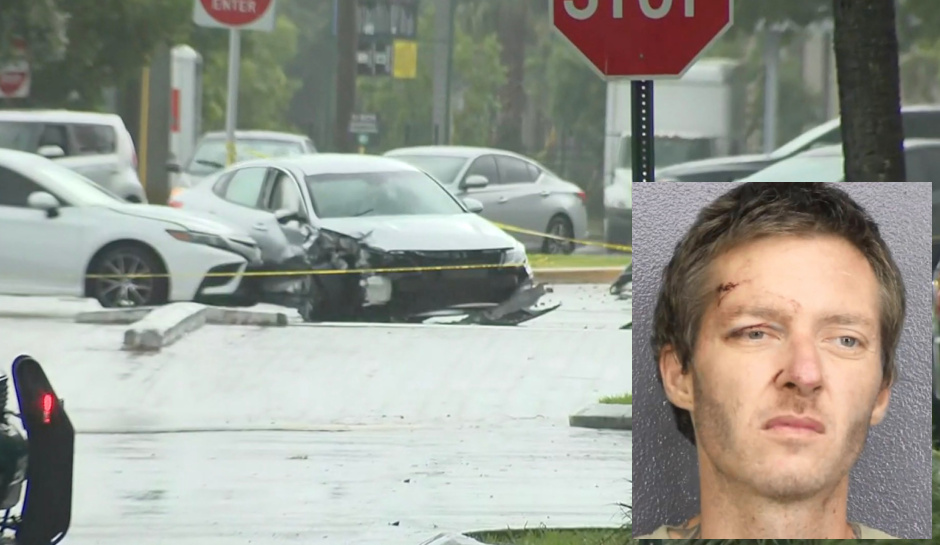 Police arrested a naked Florida man on Friday after a chase that involved three car crashes across two cities and began, apparently, with the deaths of a 31-year-old woman and her 10-month-old nephew.

The suspect — identified by WSVN via jail records as 35-year-old Dale Spidle — allegedly shot and killed another person during the wild spree, a person who may have been the driver of the last vehicle Spidle crashed Friday afternoon.

Coral Springs resident Diane Hirschfield told the television station that Spidle lives in the same complex where the woman and the infant boy were found when police tracked the first car Spidle was driving.

Coral Springs police said their involvement began at about 2 p.m. when first responders arrived at the scene of a hit-and-run, according to WSVN. Investigators viewed surveillance footage from a nearby gas station and saw a silver Kia, driven by Spidle, causing a chain-reaction crash. Spidle sped away from the scene, although McKeone said the responding officer made an initial contact with him.

Not long after that accident, the Kia was involved in a four-car crash in Coconut Creek. Investigators say Spidle shot and killed someone at this scene — possibly the driver of a white pickup truck that Spidle jumped into before again speeding away.

Spidle crashed again just a few blocks away and took off on foot, completely naked.

He reportedly tried to snatch a woman’s neckless before police finally caught up with him at a nearby gas station and took him into custody, WPLG reported.

Investigators have not released the names of the victims.

Jail records show that Spidle has been charged with murder, robbery, aggravated battery, resisting an officer, burglary, three counts of leaving the scene of a crash, and reckless driving. He was ordered held without bond at a court appearance on Sunday.