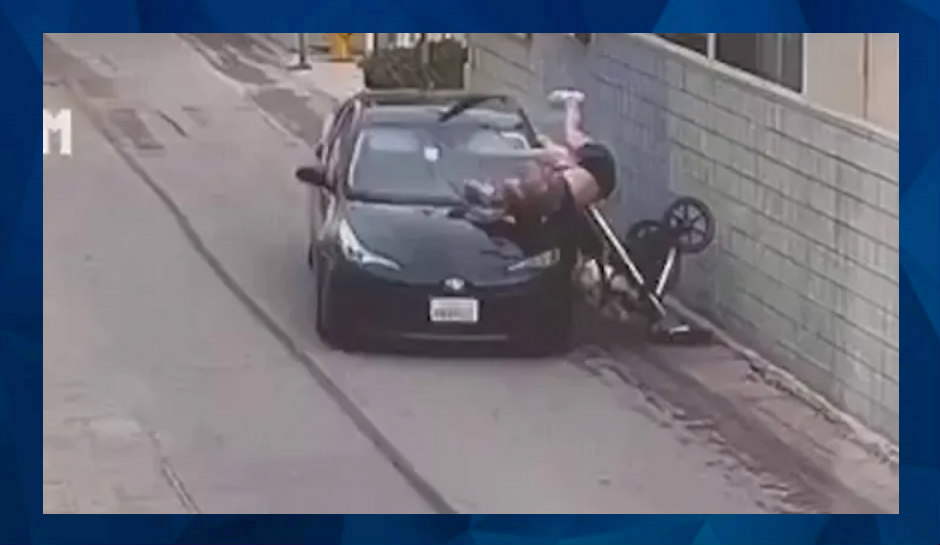 Intoxicated Teen Driver Who Plowed into Mother and Child was on Probation at Time of Crash, Sentenced to ‘Camp’

A California mother is outraged that a teen driver who barreled into her and her child last year has received what she says is a slap on the wrist, even though the teen was on drugs at the time and had a criminal record, Fox News reports.

“How on earth can that be? He tried to murder two innocent pedestrians. Murder. And we have video evidence. My child would be dead if I hadn’t been there to protect him,” the mother, identified publicly only as Rachel, told Fox News.

The teen claimed that the mother came out of nowhere, but the woman and security camera video from the incident on August 6, 2021, tell a different story. The mother can be seen walking her child in a stroller before she moved to the side of the road to allow an oncoming car to pass.

The driver briefly stopped and then continued moving forward until onlookers in the area chased the vehicle and prevented the teen from fleeing, according to KABC-TV.

The Los Angeles County District Attorney’s Office initially charged the teen with felony driving while intoxicated. However, the DA’s office reached a plea deal with the teen to two felony charges of assault by means of force likely to produce great bodily injury and one felony count of hit-and-run.

Sources told Fox News that the DA’s office declined to pursue more severe charges like assault with a deadly weapon or attempted murder.

On Friday, the teen was sentenced to five to seven months in a juvenile probation camp, which has been described as “less than a military school and a little bit tougher than a summer camp,” according to Fox News.

The outlet reported on Sunday that the driver had a criminal record and was on probation when he plowed into the mother and child. The teen had been convicted of felony poisoning after he spiked a peer’s drink at Palmdale High School in 2019, sending the victim to the hospital.

“In this case, this teen will be held accountable for his actions and receive the needed services to foster positive development to keep him from committing future offenses,” the statement reads, according to KTTV.

Rachel, the mother struck by the teen, blasted Gascon’s office and said they “are highlighting their incompetence and their complete disregard for victims,” according to Fox News. She also questioned why the teen’s record will reportedly be wiped once he turns 18.

“Someone with a criminal record tried to kill me and my son, and George Gascon thinks that five months of camp is a sufficient punishment. Gascon’s office took the time to falsely comment on my case, but has taken no time to ask how we are doing. That’s because he doesn’t care. Gascon and his staff are highlighting their incompetence and their complete disregard for victims,” Rachel said, according to Fox News.

In a victim impact statement, Rachel wrote that she thought she and her child were going to die in the crash.

“I thought those were the last moments of our lives; we were dead,” the mother wrote, according to CBS News. “That feeling, along with the memory of a car accelerating directly into us, will haunt me forever.”