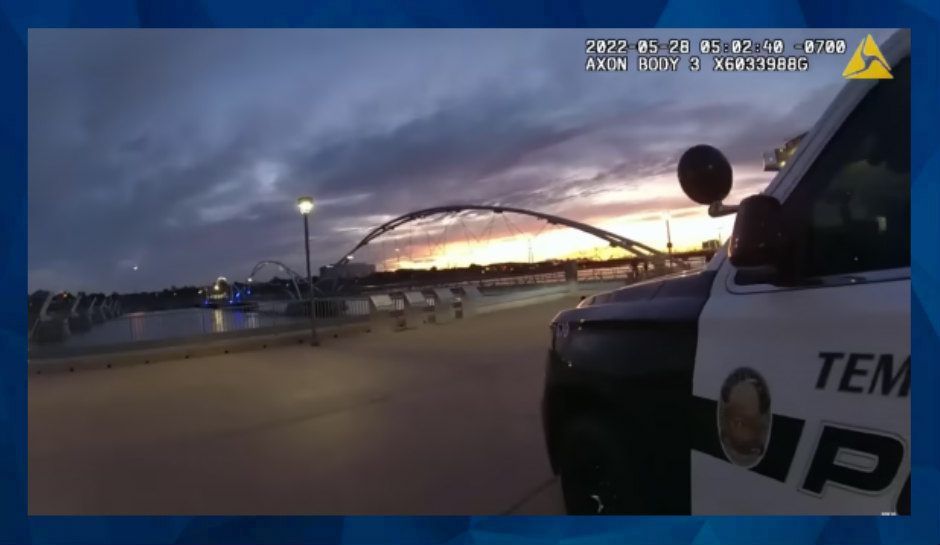 Police in Tempe, Arizona, are coming under fire after a man drowned in a lake, and officers watching him allegedly did nothing to help, despite desperate pleas from the man and his wife, KPHO-TV reports.

Shortly after 5 a.m. on May 28, police were dispatched to a report of a disturbance between 34-year-old Sean Bickings and his wife near the Elmore Pedestrian Bridge.

Bickings and his wife told police they were not arguing, but officers ran the couple’s names to check for outstanding warrants. Officers determined that Bickings had three outstanding felony warrants, according to KNXV-TV.

As officers were speaking with Bickings, he scaled a fence and then jumped into Tempe Town Lake, despite police telling him that swimming in the body of water was not allowed.

“I’m gonna go for a swim,” Bickings can be heard saying in body camera footage released by the police department. “I’m free to go, right?”

The video shows Bickings swimming away from shore, at which point one officer can be heard asking, “How far do you think he is going to be able to swim?”

The police department withheld the remainder of the footage on the basis that the video of the drowning is too sensitive.

But police did release a transcript of what happened next.

According to the transcript, Bickings tells officers that he is drowning, at which point officers direct him to swim to a pylon to remain afloat.

“I’m drowning,” Bickings says, according to the transcript.

An officer responds: “Come back over to the pylon.”

“Okay, I’m not jumping in after you,” another officer says.

Bickings’ wife begs police to intervene, telling officers that she is “just distraught because he’s drowning right in front of you and you won’t help,” the transcript reads.

One police officer allegedly threatened to put the woman in a police car if she didn’t settle down.

Bickings’ wife said she was trying to regain composure but that she was upset because she loved her husband and cared about his well-being.

One of the officers did attempt to secure a boat to rescue Bickings, but that effort proved too late, according to KPHO-TV.

Bickings then drowned and his body sank below the surface of the water. Crews from the Tempe Fire Department’s dive and rescue team recovered the body hours later shortly before 11:30 a.m.

The police department has placed the three responding officers on paid administrative leave pending the outcome of an investigation, which is customary in such incidents, according to the city.