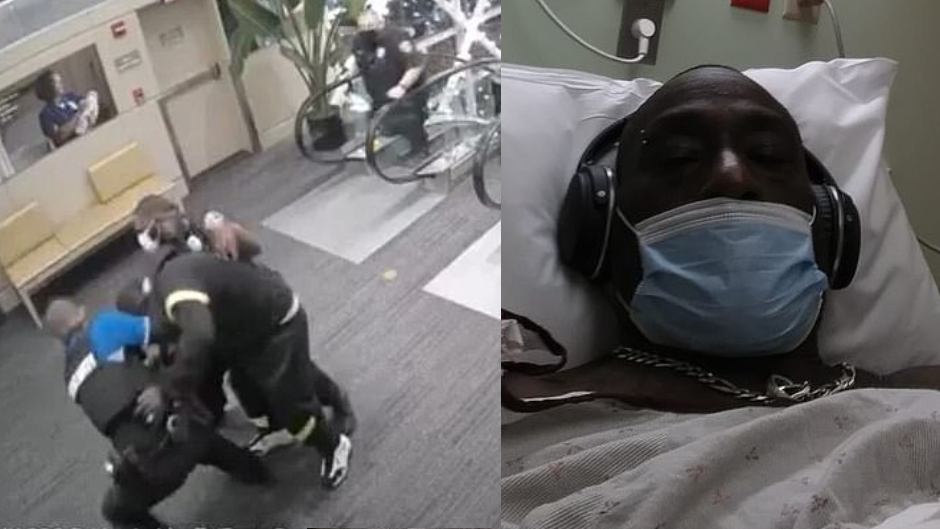 Surveillance footage from last year apparently shows guards at a Missouri hospital attacking a kidney patient because they believed he was planning to steal a car.

On April 7, 2o21, Barnes-Jewish Hospital told Hughie Robinson, 52, that he was second in line to receive a kidney transplant. He went to the hospital the same day, and he underwent treatment for four days before he was discharged because a transplant never came, according to the St. Louis Post-Dispatch.

The Post-Disptach reported that Robinson parked his Buick in the garage on April 7. The same day he was discharged on April 10, the hospital called him to let him know he left his wallet.

During that call, the hospital instructed Robinson to park in a specific area that was not where he usually parked. Nevertheless, he reportedly obliged and retrieved his wallet.

Afterward, Robinson walked to where he normally parked his Buick, presumably forgetting he had to park in a different location. When he could not find his car, he asked for help from the front desk. He and a security guard then looked for his car with no luck, according to the Post-Dispatch.

Robinson continued to look around the parking garage. Meanwhile, security guards reportedly grew suspicious that he was casing cars — despite Robinson getting a guard’s help moments earlier.

Eventually, several guards — including the guard who previously helped Robinson — allegedly approached Robinson as he asked what the problem is. The guards did not answer, but one of them forcefully grabbed Robinson’s shoulder and arm while another tackled him, a lawsuit acquired by the Post-Dispatch detailed.

The third guard allegedly jumped on top of Robinson, who was weak from recently undergoing treatment for advanced renal failure. Robinson cried out that the guards were hurting him, to which one of them responded, “Good,” per the lawsuit.

Robinson was reportedly placed in handcuffs and taken to an interrogation room, where they asked him why he was in the parking garage. The Post-Dispatch reported that one of the guards was filmed smashing Robinson’s head into a wall with his forearm.

One of the officers allegedly told Robinson, “If one of my officers, or WashU officers see you back on this property again, we’re going to do this whole thing again, cause you ain’t supposed to be here. You cool with that? … Don’t come back.”

Despite the guard’s alleged threat, Robinson had to return to the hospital as he was still undergoing treatment for his kidney.

According to the Post-Dispatch, hospital security guards never asked to see Robinson’s garage parking ticket — which was in his pocket. They allegedly also overlooked that he still had a hospital bracelet from the four days he recently spent there.

Robinson filed a lawsuit against the hospital last year, before he died from his illness. His suit accused the hospital of false imprisonment, assault, and battery.

The news outlet reported that Robinson’s daughter almost never saw the footage, as the hospital pursued a protective order in an attempt to keep the videos private. A St. Louis Circuit Court judge initially granted the order, but she reversed her decision after confirming the two videos did not show any other patients in a manner that would spark privacy concerns.

Robinson’s lawsuit is still active, and a spokesperson for Barnes-Jewish Hospital declined the Post-Dispatch’s request for comment. A St. Louis Circuit Court judge denied the hospital’s bid to have the lawsuit dismissed.

Robinson’s daughter told the publication, “I just want justice for my father.”