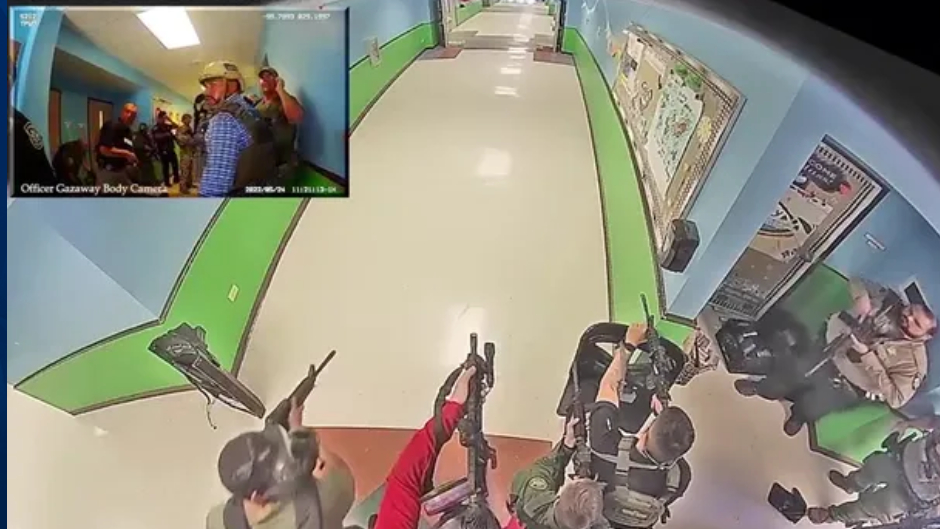 Officers flee to the end of the hallway as gunfire erupts. Minutes later, more heavily-armed officers from state, and federal agencies arrive in the hallway.

According to American-Statesman, a bystander’s video caught the gunman shooting at the school prior to entering on May 24.

Video footage obtained by the news outlet suggests that officers stood by at least 45 minutes after the initial gunfire, even as the gunman fired four additional rounds. Officers remain inactive even after asking for keys for a presumably unlocked classroom, and gathering tear gas, gas masks, and a sledgehammer. An officer is heard saying they are “making entry” at one point, but it does not occur.

The American-Statesman reported that various agencies responded to the scene, including Texas Rangers, U.S. Border Patrol, and U.S. Marshals Service. Despite this, it was an hour and 14 minutes before anyone entered the classroom and fatally shot Ramos. By then, 21 people died in that classroom.

Texas Department of Public Safety director Colonel Steven McCraw has called the response to the May 24 shooting an “abject failure” which he blamed on Pete Arredondo, 50, chief of the Uvalde police school district. McGraw said Arrendondo failed to promptly confront gunman Salvador Ramos despite being the on-scene commander and had what he needed to go into the classroom where the gunman was within three minutes.

Arrendondo told the media that he did not bring his two radios as he believed they would weigh him down. He also claimed he spent an hour trying to unlock a classroom door that separated him and the gunman.

Security footage reportedly showed that police never tried to open the classroom door — which would contradict Arredondo’s claims that he spent an hour in the hallway trying to locate a key that would open the door.

The latest report, which was penned by the Advanced Law Enforcement Rapid Response Training (ALERRT) Center, heavily scrutinized law enforcement’s handling of the deadly mass shooting. It stated that an officer spotted Ramos outside the school, but a supervisor never gave him the OK to shoot him.

Uvalde Mayor Don McLaughlin has disputed this claim. However, the mayor previously said he is not confident in the Department of Public Service’s ongoing investigation into the shooting at Robb Elementary School, going as far as to suggest it was a “cover-up.” He has urged Governor Greg Abbott to intervene in the investigation, as he also believed McCraw was possibly shielding other agencies from scrutiny.