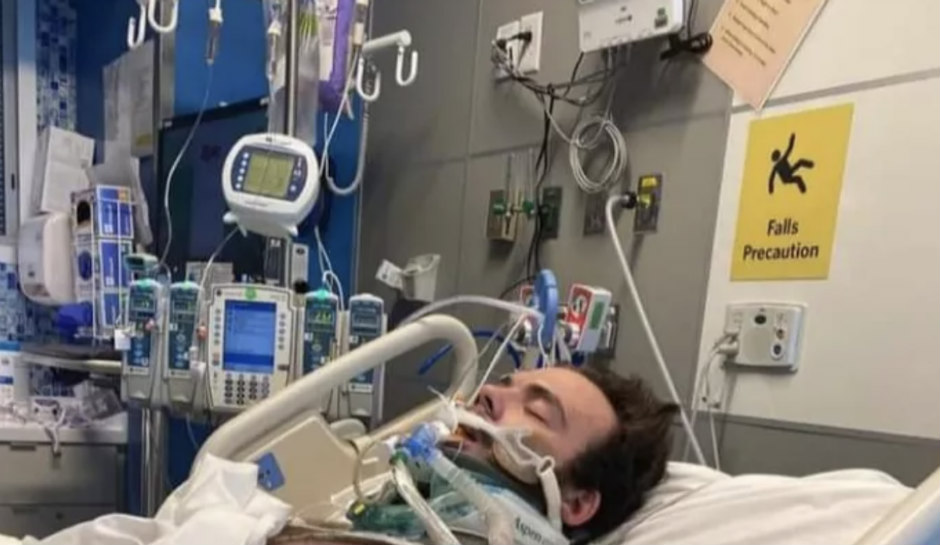 An Indiana pizza delivery man rescued four children and a teen from a burning home earlier this month and is now being honored for the heroic feat, which left him with severe injuries and hefty medical bills, USA Today reports.

Shortly after midnight on July 11, Nicholas Bostic was driving in a Lafayette neighborhood when he spotted flames shooting from a house. Bostic stopped and intended to dial 911, but he realized he left his phone at home, so the 25-year-old ran to the burning building and found an open back door.

Inside, the smoke stung his nostrils and eyes, but Bostic managed to call out warnings about the fire.

“I shouted, ‘Anybody here? Get out! Get out! Fire!’” Bostic told The Washington Post.

Bostic heard nothing in response and was about to leave, but he noticed the outline of someone at the top of the stairway with several children. That turned out to be 18-year-old Seionna Barrett, who was babysitting her three younger siblings and one of the children’s friends.

Bostic rushed up the steps and helped guide Barrett and three of the children, ages 1 to 13, out of the house and to safety on the street. But Barrett’s 6-year-old sister was still trapped inside, so Bostic, whose lungs and eyes were already burning, darted back into the home and searched for the girl.

The good Samaritan found the child, held her, broke a second-story window and jumped out using his body to shield the girl from the fall.

“I ran inside and looked under beds and closets, but I couldn’t find her,” Bostic told the Post. “But when I got to the stairs, I heard some faint crying.”

Here’s the video to go along with the story. pic.twitter.com/TvZ5wzCg1f

Bostic then collapsed on the ground, but despite his injuries, he can be heard on the body camera footage asking about the condition of the little girl.

“Is the baby OK? Please tell me that baby is OK,” Bostic can be heard asking in the footage.

A police officer relays that the girl is all right and adds, “You did good, dude.”

Medics rushed Bostic to an Indianapolis hospital, according to 18 News. He was treated for severe injuries from smoke inhalation and the fire, including burns to multiple parts of his body and a significant laceration on his arm.

All told, four of the five home occupants had no injuries, and the 6-year-old girl suffered a minor cut to her foot because of the fall, but she was treated by medics at the scene.

“[Bostic’s] selflessness during this incident is inspiring. What he doesn’t understand is his actions weren’t ordinary, they were extraordinary,” Sherer told the Post. “He went down those stairs to save that little girl when he thought it was impossible just moments before . . . There’s only one way to define that: courageous and heroic.”

Bostic met the Barrett family for the first time since the fire on Saturday at a church service. David Barrett, the family’s father, told his children that Bostic now is “officially part of the family,” according to the Post.

“We feel very blessed for what Nick did,” David Barrett told the Post. “He’s a real hero, and my daughter’s a real hero for waking the kids up. I don’t like to think about what might have happened if Nick hadn’t shown up. I’m grateful beyond words.”

Community members are now fundraising to help Bostic pay for his medical care and to help the Barrett family replace the belongings they lost in the blaze. A GoFundMe page for Bostic had raised more than $300,000 as of Tuesday.

“’Going to the hospital is expensive,” Bostic told the Post. “I’m really grateful that everyone has been so kind and giving.”

The fire is believed to have started by ashes that were emptied into a bucket on the front porch.