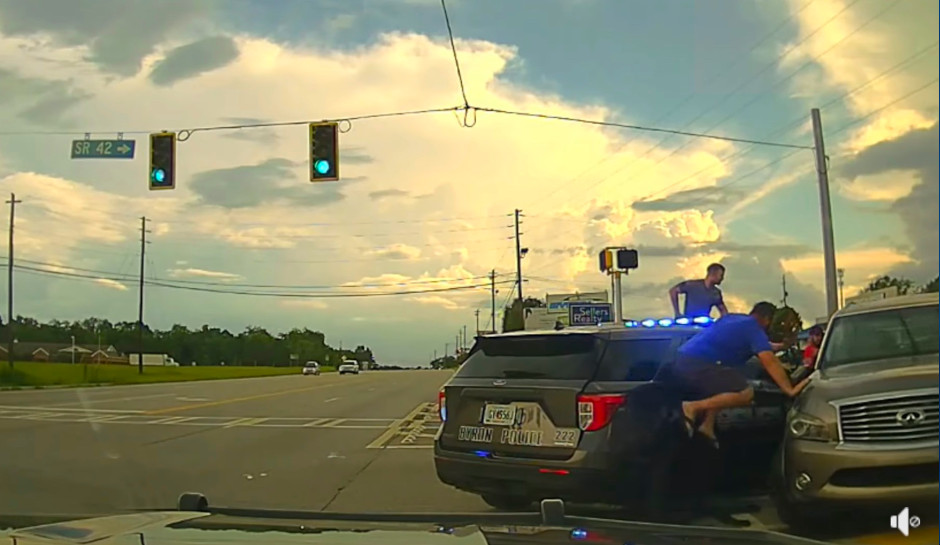 A small Georgia town was the scene of a wild reckless driver who appeared to aim and oncoming cars, struck several vehicles — including police cruisers — as well as hitting officers and civilians. And the driver had a young child in the back seat of her SUV.

Byron police said that civilians had initially blocked the vehicle in and tried to talk to the driver, later identified as 24-year-old Sierra Hibbert, and called 911 to report the dangerous driving. When police began to arrive, however, Hibbert slipped between the vehicles, only to be blocked again by police cars at a highway intersection.

Officers put stop sticks beneath her tires as they tried to talk with her, but Hibbert was uncooperative and wouldn’t talk with the officers.

Abruptly, she backed into a car behind her, then pulled forward and struck an officer and a police cruiser. Then she backed up again and pulled forward, this time striking two witnesses and another police car before she headed north on Highway 49, now with a flat tire.

Officers again tried to block Hibbert, and she backed into a third police vehicle and drove forward into a police car she’d already hit once, this time causing serious damage.

And she drove away again, but only for a short distance before officers, assisted by Peach County deputies, blocked her vehicle once more and finally got her out the vehicle.

Byron police posted a second video from one of their officers’ body camera — this one with audio.

“You nearly killed 10 people,” one of the officers told her, as she denied having done anything at all. A witness jumped into the back seat of Hibbert’s vehicle and helped police take out the young child, who was not injured. The woman got back out of the vehicle, slamming the door and yelling at Hibbert, “You almost killed that kid!”

Byron police said none of the civilians or police officers who were hit were seriously injured. The Peach County Sheriff’s Department is handling the investigation, police said.

[Featured image: One witness climbs onto the hood of a police car while another jumps out of the way/Byron Police Department]