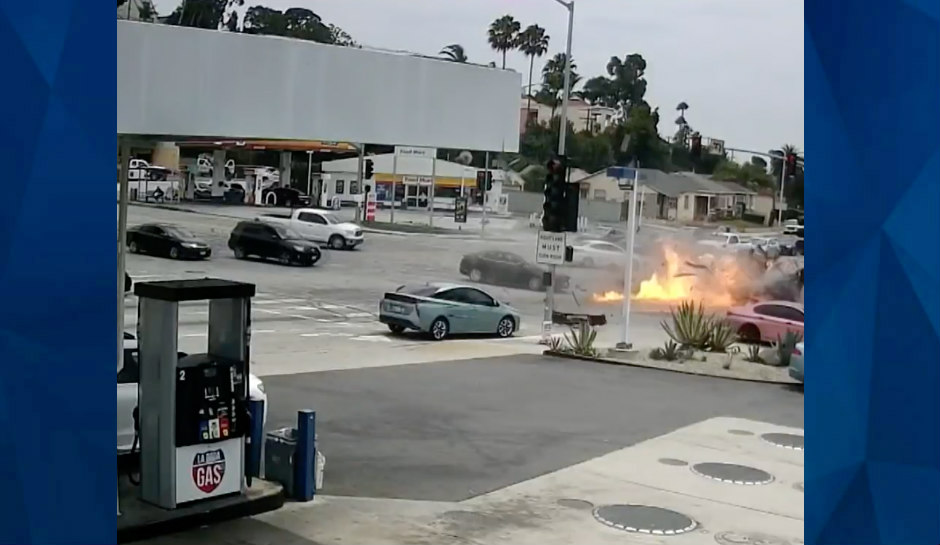 SEE IT: Baby, Pregnant Mom and 3 Others Die in Fiery Car Crash After Speeding Mercedes Barrels Through Intersection

Stunning footage shows the moment that a speeding black Mercedes barrels through a California intersection and slams into traffic, killing at least five people including a pregnant woman and an infant, and injuring eight others.

The fiery crash occurred shortly after 1:30 p.m. Thursday in the Windsor Hills neighborhood of Los Angeles, according to NBC Los Angeles.

Authorities say the suspect was hurtling southbound on South La Brea Avenue going more than 100 miles per hour, ran a red light at Slauson Avenue and plowed into other vehicles at the intersection.

Aerial footage showed several vehicles burned, including one that appeared to have been split in half and one that had rolled onto its roof.

Debris was strewn around the intersection, which was shut down for the remainder of Thursday and into Friday morning.

Veronica Esquival told KTLA-TV that as she was pumping gas near the intersection, the crash sent debris flying, including a baby that landed right in front of her.

“All of the sudden, a baby literally flew from the middle of the intersection to the middle of the gas station and landed right on the floor in front of me,” Esquival told KTLA-TV. “One of the workers came and saw me with the baby and took the baby out of my hands. Somebody tried to resuscitate the baby, but the baby was gone.”

Of the surviving injured, six minors and two adults were rushed to the UCLA Medical Center; seven of them were released after being treated and one patient was admitted into the hospital in fair condition.

The victims who died were declared dead at the scene. Police said the deceased included three adults and an infant; the gender and age of the fifth victim has not yet been released.

Authorities thus far have identified only one of the adults who died: 23-year-old Asherey Ryan, who was pregnant, according to the Los Angeles Times. The pregnant woman lost her unborn child, which the California Highway Patrol was counting as another death “due to rare circumstances,” CHP spokesperson Franco Pepi said, according to the Times.

Police said the suspect is a woman in her 40s. She reportedly has major injuries but is expected to survive. Criminal charges against her are likely.

It is not clear whether the driver of the Mercedes was under the influence at the time of the crash. Medics had given her so much pain meds that a drug evaluation at the scene would not have been feasible.