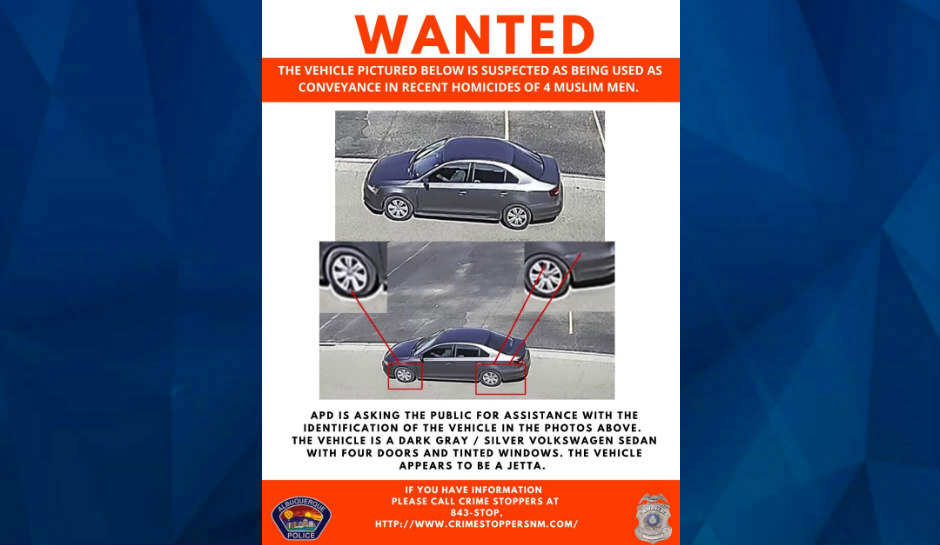 A dark-colored Volkswagen may be tied to the shooting deaths of four Muslim men in Albuquerque, New Mexico, authorities said Sunday as they asked for the public’s help in the hunt for the perpetrator.

The vehicle may be a dark gray or silver VW Jetta or Passat, has four doors, and appears to have tinted windows, KOB4 reports. One day earlier, on Saturday, police said the four killings may be connected, with the most recent murder occurring shortly before midnight on Friday, when Naeem Hussain was gunned down.

Hussain had attended funerals for two of the murdered men earlier in the day on Friday, according to the Albuquerque Journal.

Those funerals were for 27-year-old Muhammad Afzaal Hussain, who was fatally shot on August 1, and 41-year-old Aftab Hussein, who was killed on July 26. The first victim, 62-year-old Mohammad Ahmadi, was shot in a halal supermarket parking lot on November 7, 2021.

Despite the apparent similarities in the shooting deaths – all of the victims are Muslim and appear to have been ambushed – police are not yet classifying the killings as the work of a serial killer.

“I think it is too early to comment on that or classify it with a term like that right now,” Albuquerque Police Department public information officer Gilbert Gallegos told KOB4 in response to a question about whether investigators consider the perpetrator a serial killer.

“This is an alarming death that connects to the others as far as we can tell, so we will focus on that and focus together with our federal partners.”

Afzaal Hussain was the planning and land use director for the city of Española. The mayor there, John Ramon Vigil, took to Facebook to honor Hussain.

“I am deeply saddened to report that Monday night City of Española Planning and Land Use Director Muhammad Afzaal Hussain was shot and killed in Albuquerque. APD is investigating the shooting, but it appears Muhammad was randomly targeted in a senseless act of violence,” Vigil wrote on Facebook.

“Muhammad was soft-spoken and kind, and quick to laugh. He was well respected and well-liked by his coworkers and members of the community. Tuesday would have marked his first-year anniversary leading the City’s planning team.”

Meanwhile, officials elsewhere have also expressed concern with the killings.

President Joseph Biden tweeted that he is “angered and saddened by the horrific killings of four Muslim men in Albuquerque.”

“While we await a full investigation, my prayers are with the victims’ families, and my Administration stands strongly with the Muslim community. These hateful attacks have no place in America,” Biden wrote.

New Mexico Governor Michelle Lujan Grisham wrote in a tweet on Saturday that the slayings appeared to be “targeted.”

“The targeted killings of Muslim residents of Albuquerque is deeply angering and wholly intolerable,” Grisham wrote in a Twitter post.

“I am sending additional State Police officers to Albuquerque to work in close coordination with APD and the FBI to bring the killer or killers to justice – and they WILL be found. We will continue to do everything we can to support to the Muslim community of Albuquerque and greater New Mexico during this difficult time.”

Ahmad Assed, the president of the Islamic Center of New Mexico, said the murders are terrorizing Albuquerque’s Muslim community.

The city is working to provide resources to people who are afraid of coming out of their homes, including delivering meals, KOB4 reports.

A $20,000 reward is being offered for information leading to the arrest of those responsible for the killings. To report information, call Albuquerque Metro Crime Stoppers at 505-843-STOP (7867).

The Council on American Islamic Relations is also offering a $10,000 reward.