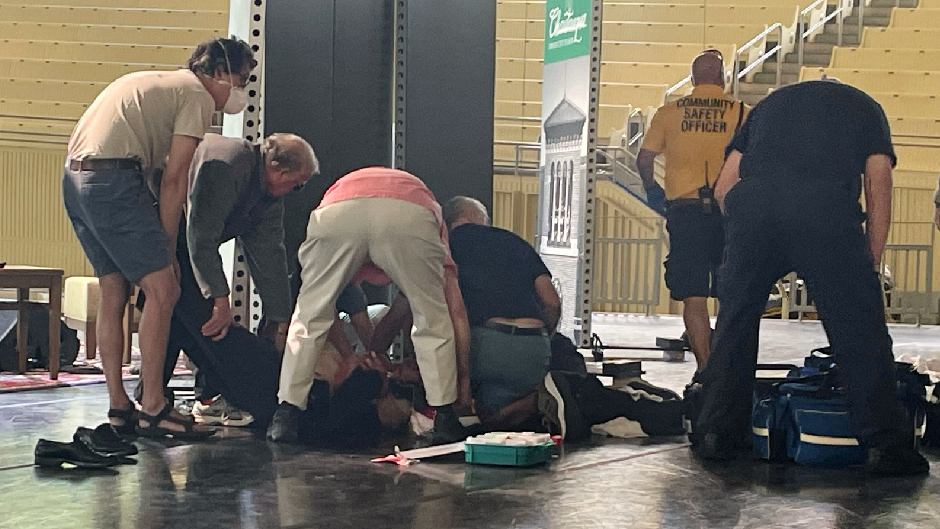 Author Salman Rushdie is undergoing surgery in New York after a 24-year-old New Jersey man jumped onto a stage where he was speaking and stabbed him in the neck.

Rushdie’s condition was not known, although a doctor who had been in the audience at the Chautauqua Institution described the writer’s wounds as “serious but recoverable.”

New York State Police identified the attacker as Hadi Matar and said he was arrested at the scene. Maj Eugene Staniszewksi said Matar’s motive was unknown, according to the Associated Press.

Law enforcement sources told The New York Post, however, that Matar had posted on social media in support of Iran and the Revolutionary Guard, as well as Shi’a extremism.

As CrimeOnline previously reported, the attacker rushed the stage as Rushdie was being introduced and confronted the 75-year-old, stabbing or punching him 10 to 15 times.

The event moderator, 73-year-old Henry Reese, was also injured in the attack, suffering a facial injury, the AP said. Reese, who co-founded an organization that sets up residencies for writers facing persecution, was treated and released. He and Rushdie were scheduled to discuss the United States and how it serves as a safe haven for writers and other artists in exile from their home countries.

Iran’s late Ayatollah Ruhollah Khomeini issued a fatwa calling for Rushdie’s death over his 1988 book, “The Satanic Verses,” prompting the Indian-born Rushdie to go into hiding as violent protests against him erupted in the Muslim world. The Japanese translator of the book, Hitoshi Igarashi, was stabbed to death in 1991.

The Iranian government said in 1998 that it no longer backed the fatwa, but Ayatollah Ali Khamenei, the country’s current supreme leader, has said as recently as 2019 that his predecessor’s fatwa  is “irrevocable,” Reuters said. Iranian organizations — some of them semi-official — have raised millions of dollars as a bounty for Rushdie’s death.

Hundreds of people were seated in the Chautauqua Institution’s outdoor amphitheater for the talk. Matar, officials said, bought a pass to the event, according to Reuters. No security checks were conducted at the event, held in western New York.

[Featured image: Salman Rushdie is treated on the floor after he was attacked/AP Photo/Joshua Goodman]