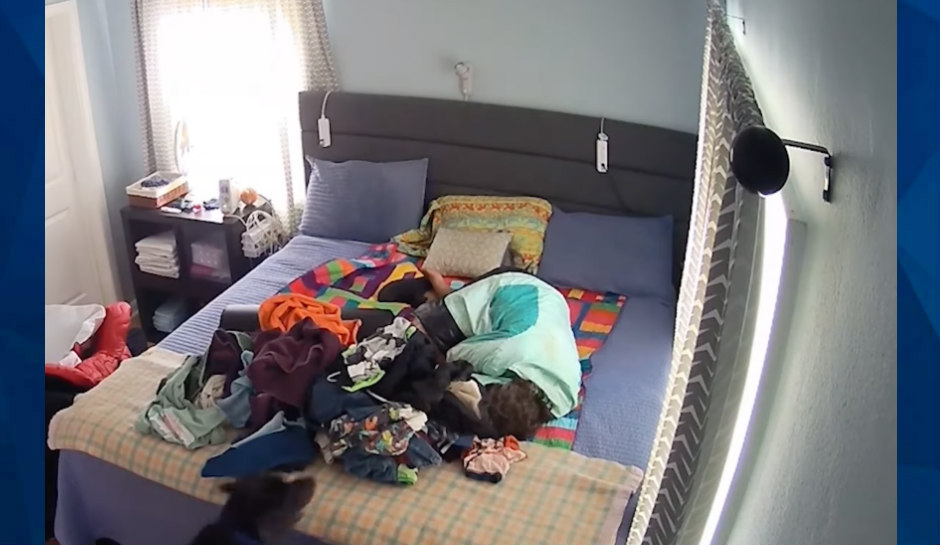 An Oregon mom says she feels shocked and dismayed after a stranger found sleeping on her son’s bed attacked her with a piece of furniture, only to learn that charges were dropped against the intruder, FOX 12 reports.

The incident occurred Monday in northeast Portland, where the homeowner, Kelsey Smith, first suspected something was wrong when her dogs began barking.

Smith said she had left the front door open because contractors were supposed to be doing work on an accessible bathroom for her son.

The mother then followed the dogs to her son’s bedroom, where she saw that someone appeared to be under a pile of clothes on a bed.

“The dogs continued to go crazy, specifically my chihuahua, which was running circles around my legs, which was really unusual,” Smith told the television station.

“I followed her to where the other dog was into my children’s bedroom. My lab was standing on top of the bed on top of a pile of clean clothes that I had thrown on there. I walked in wondering if she had cornered a mouse or something because she was going crazy and I realized there was a person under there.”

Smith’s son was not in the room and she initially thought it might have been her husband, but when she called his name, she didn’t get a response.

That’s when she realized it was a stranger.

“I backed out of the room, talking to my friend on the phone saying I needed help, that there was a homeless person in the kid’s bed,” Smith told FOX 12. “At that point she leapt up, I recognized her as a woman. She hopped off the bed and picked up the ottoman at the foot of the bed and bum rushed me, threw it at me, and then meandered out the door.”

A surveillance camera placed in the room, which is used for monitoring the son for medical purposes, captured the incident.

Smith can be heard telling the intruder to leave while her 24-year-old son intervened and called 911.

“My first thought was ‘what is going on?’” Smith told FOX 12. “The fear didn’t come until after she was gone and I started to run through the scenarios in my head about how this could have played out differently if my younger kids had been home. My 24-year-old son heard the commotion and came running upstairs, charging up the stairs because he knew something was wrong. He went straight out the door and into the street following her, calling 911.”

Authorities subsequently arrested 54-year-old Terri Lynn Zinser as she was allegedly attempting to make her way into another residence in the neighborhood.

Zinser was initially charged with burglary and harassment, but public records show she was released from custody on Tuesday. She did not have to pay any bail and was freed via a “court ordered release,” Fox News reports.

Smith reportedly contacted the Multnomah County District Attorney’s Office was told that the charges against Zinser were dropped.

“They said the charges have been dropped and that I can leave a message for the DA and he can call you back,” Smith told FOX 12. “I haven’t heard anything and that was two days ago. I have to assume someone heard that message and nobody has gotten back to me. I don’t understand why she is not in jail. She’s not harmless. She proved that. She’s proved that from the stories that I’ve heard from other people.”

Zinser is reportedly known to others in the area, including a neighbor who had posted pictures of her breaking into their home.

The area’s mail carrier allegedly told Smith that Zinser harasses her on the mail route and that “she couldn’t walk down the street without the woman screaming at her, swearing at her, following her around. She told me she doesn’t feel safe around that woman,” Smith told FOX 12.

She added: “I feel like the city is declining rapidly and there is a need for more mental health services, more training for the police, probably more police, more community outreach, but I don’t know.”

After the story came to light, the Multnomah County District Attorney’s Office told KATU-TV that it is now reviewing the matter. In a statement to the television station, the office said it is “reviewing this case and the previously dismissed cases to determine whether we are able to proceed with prosecution,” according to KATU-TV.

“Based on recent federal court rulings and recent history with this defendant having similar cases dismissed due to a lack of participation in treatment and the court’s inability to compel the defendant to participate in treatment, we had initial concerns about whether we could proceed with this case at this time. The lack of mental health resources in our community is unacceptable when coupled with the inability to compel unadjudicated defendants to engage in available treatment options.

The current crisis of capacity at the Oregon State Hospital puts the safety of our community, and the most vulnerable persons in our community, at risk. In this particular case, the accused had recently spent months at the Oregon State Hospital during which time the staff there was unable to restore her ability to aid and assist her court appointed lawyer.

She was then ordered to engage in treatment in the community, but she did not appear for her evaluation and she left the treatment facility. Multnomah County Circuit Court Judge Nan Waller dismissed the previous charges pending against her in early August. Our Strategic Prosecution Unit is reviewing this case and the previously dismissed cases to determine whether we are able to proceed with prosecution. Due to the ongoing process, MCDA will not be making further comments on this case.”