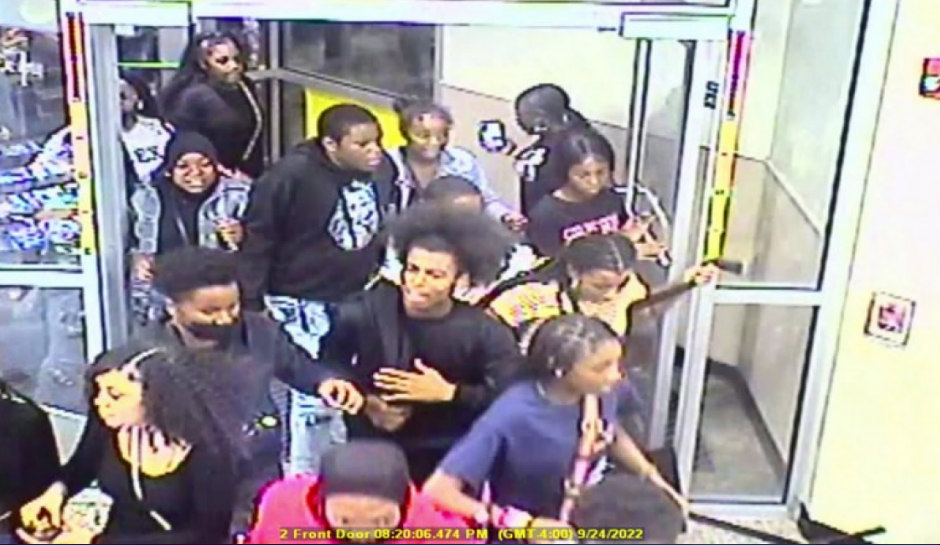 Newly released footage shows the chaotic scene at a Philadelphia convenience store ransacked by a mob of about 100 people over the weekend, WPVI-TV reports.

The footage, released by the Philadelphia Police Department, shows looters swarming the Wawa store to steal food, beverages, and other products around 8:15 p.m. Saturday. Another video that went viral shows people standing on furniture and throwing food inside the store.

Most of the suspects are believed to be juveniles, some of whom were also seen jumping atop nearby vehicles, according to the police department.

Authorities are urging parents and community members to help identify those who are responsible.

“I know there are several parents that will look at this and say, ‘That’s not how I raised my kids,’ and that’s understandable. But also there is a responsibility to then identify your kids to us,” Deputy Police Commissioner John Stanford said at press conference on Monday, according to Fox News.

“The bottom line is we cannot have this type of behavior happening in this city. The business community doesn’t deserve that, the citizens don’t deserve it,” Stanford added, according to Fox News.

On Monday, Wawa issued a statement that said it is cooperating with police.

“We are working closely with law enforcement to support their efforts to bring all of the perpetrators to justice as soon as possible,” the statement reads Fox News reports. “We remain committed to protecting our associates and customers and ensuring a safe, welcoming environment for each customer, in every Wawa store. Nothing is more important to us.”

Investigators are coordinating with prosecutors to determine what charges to file against the looters.

To report information about the case, call the Philadelphia Police Department at 215-686-TIPS.