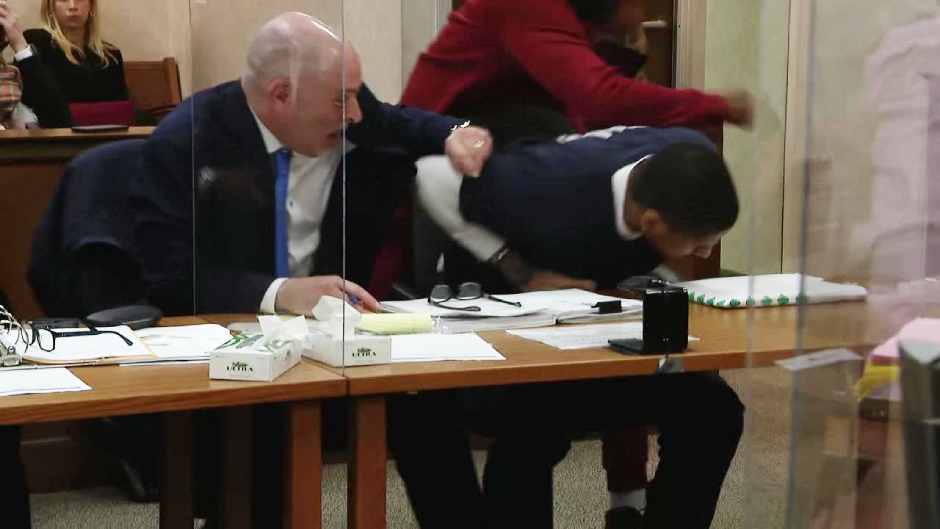 The twin brother of a Michigan man who was murdered in July reportedly attacked the accused killer in court on Wednesday after they were shown footage of the slaying.

According to WJBK, JaRay Robertson’s brother left the courtroom’s gallery and struck Jeffrey Clark in the head and back. Clark was apparently unable to defend himself as a waist restraint restricted the full use of his hands.

The attack occurred during a preliminary hearing, as prosecutors presented video footage that apparently showed Clark killing Robertson in a parking lot in Macomb County. WJBK reported that surveillance video depicted a victim laying in the parking lot while another man stood over him with a gun.

The suspect was filmed opening fire multiple times as the victim puts his hands up, presumably begging him to stop.

Prosecutors were in the process of showing additional footage when Robertson’s brother attacked Clark. Prosecutors also said that Clark had a GPS monitoring device on his ankle at the time of the shooting.

According to authorities, the shooting stemmed from a disagreement Clark and Robertson had in Roseville. Clark allegedly fired shots at Robertson, who fled on foot before getting into a car with a woman. Clark is believed to have found Robertson running in the area before the murder, according to WJBK.

After the courtroom altercation, Clark is heard saying, “They gonna see you,” as he is dragged away. Robertson’s brother and another man are restrained and a third man, who WJBK identified as Clark’s father, is overheard arguing in the courtroom.

Near the end of the video, Robertson’s brother is seen handcuffed in the side of the courtroom.

“You still shoot him,” he says. “He on the ground…he still begging you not to kill this man.”

After order was restored, Wednesday’s preliminary hearing continued without any other interruptions. It is unclear whether Robertson’s brother will face criminal charges.