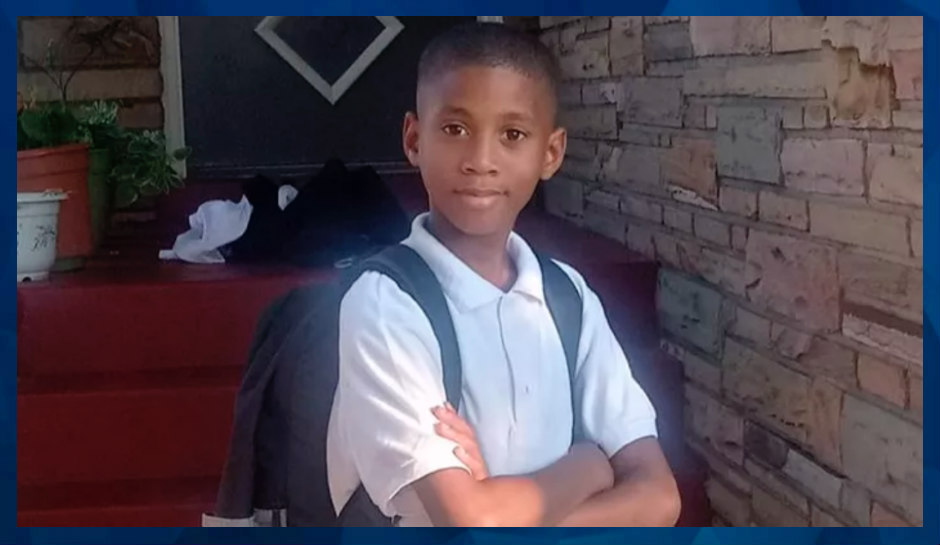 A Maryland boy is dead after he was shot while raking leaves in his front lawn, WUSA-TV reports.

Jayz Agnew, 13, was struck in the head and arm by bullets as he was raking leaves at his Hillcrest Heights home on Tuesday evening around 5:20 p.m. in Prince George’s County. The boy was rushed to a local hospital and had been in critical condition throughout the week until he was pronounced dead on Friday evening, according to FOX 5.

Authorities have not arrested anyone in connection with the shooting and do not believe the boy was the intended target. A cash reward is being offered for information that leads to an arrest.

The boy’s mother, Juanita Agnew, said she had specifically instructed her son not to wander the neighborhood, but she thought he would be safe at home.

“That was the hardest thing for me to grasp, really, was that he was home. I told him several times, ‘Don’t go wandering around the neighborhood, come directly home, make sure you let me know where you go.’ Those parameters I had in place for him, with the thought being at home was okay. He was in the front yard. It hurts to know that’s what he did and still violence came to his house,” Juanita told WJLA-TV.

Juanita described Jayz as a good son who was simply doing his chores at the time he was shot. Now she and the boy’s family must hold onto their memories of him.

“He was very, very playful. That’s one thing I know that bothers me because I can’t even think of the fact somebody wanted to hurt him,” Juanita told WJLA-TV. “Never disrespectful, never rude. You didn’t have to worry about him talking back or any of that.”

Even at age 13, the boy had already expressed interest in a future career in medicine, according to his mom.

Juanita said she is now concerned about how the boy’s death will affect his younger sister.

“I can only imagine how her little 6-year-old mind is processing this because it’s tough for me, and the two of them were very, very close. Had it not been for her getting COVID the day before, she would have been out there with her in the grass. That’s something they do, always play in the front yard. It’s really, really hard for us on multiple levels,” Juanita told WJLA-TV.

“We are heartbroken to hear that on November 11th 13-year-old Jayz Agnew was pronounced clinically dead after clinging to life in the hospital since Tuesday,” Braveboy said, according to WJLA-TV. “This bright, young man was shot and murdered while raking leaves in his family’s front yard in Hillcrest Heights. We send our thoughts and prayers to his family and friends during this very unfortunate and difficult time.

“As police continue to investigate to identify a suspect or suspects, let me say, that the violence must stop. Too many beautiful lives have been taken away from families and our communities. Those who have been senselessly killed are not simply numbers, they are sons and daughters, mothers and fathers, friends, mentors and caretakers, all who are valuable to our communities.
Neighbors described hearing between five and seven gunshots. One nearby resident added that he saw a car speed away from the scene.”

Juanita is asking that the community come together and share information so that whoever is responsible is brought to justice.

A GoFundMe account is raising money to cover what the family described as legal and investigative expenses.