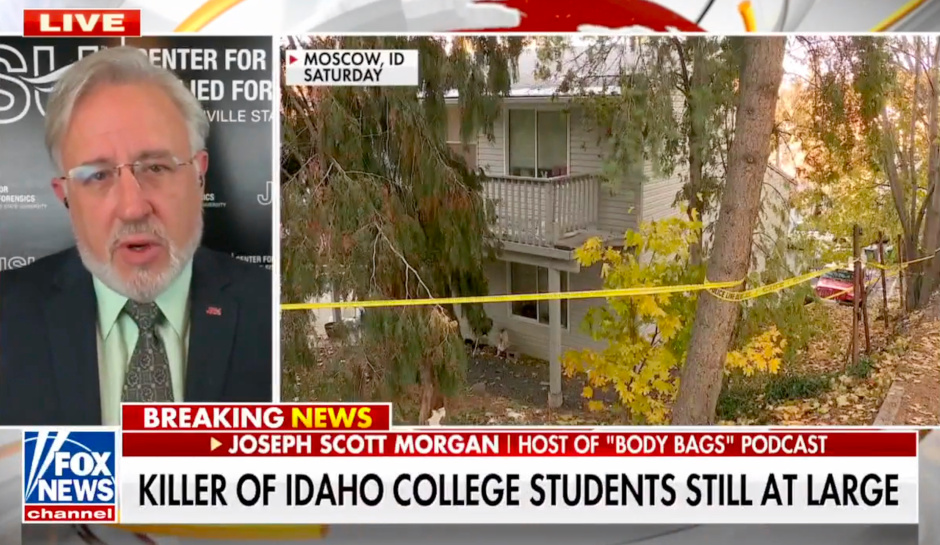 Forensic Expert: Idaho Suspect Couldn’t Have Fled ‘Without a Copious Amount of Blood on Them’

Forensics expert Joseph Scott Morgan, host of the podcast “Body Bags,” walked the Fox & Friends Weekend crew through some of the fine points of what investigators in Moscow, Idaho, are doing as they search for a suspect in the brutal murders of four University of Idaho students last weekend.

Morgan explained how investigators would be following the trail of blood throughout the residence.

“Imagine, if you will, as horrible as this is, every individual that was attacked subsequent to the first one, you’ll have what’s referred to as a commingling of blood, transferring from person to person to person,” he said.

“It would be impossible for this individual (the suspect) to have gotten out of there without a copious amount of blood on them.”

And that means, Morgan said, that the suspect would have tracked blood wherever they went — on the floor, the walks, cabinets, counters — “leaving little bits and pieces, breadcrumbs, throughout the house.”

Madison Mogen, 21; Kaylee Goncalves, 21; Ethan Chapin. 20; and Xana Kernodle, 20, were found stabbed to death last Sunday in the rented off-campus home the three women shared with two other women, as CrimeOnline has reported. Chapin, who lived elsewhere, was spending the night with his girlfriend, Kernodle.

Police believe the stabbings took place between 3 a.m. and 5 a.m., but the deaths weren’t noticed until late morning when the two surviving roommates woke up. One of them made the 911 call.

The Moscow Police Department has announced a news conference at 3 p.m. (6 p.m. ET) Sunday. Come back to CrimeOnline then to watch live.