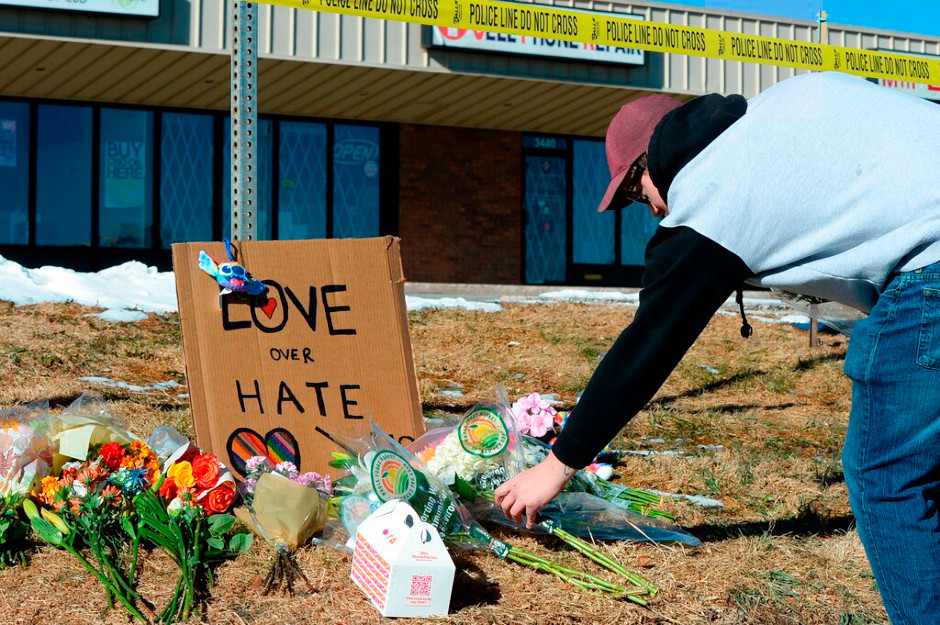 The shooting was over in minutes, but 5 people were killed and at least 25 wounded.

A 22-year-old man entered an LGBTQ nightclub in Colorado just before midnight Saturday, wearing body armor and carrying a rifle. He opened fire almost immediately, as patrons near him scrambled to get away while those further away tried to understand the commotion.

In moments, one of Club Q’s customers went against the tide of the retreating clientele.

“He saved dozens and dozens of lives,” Matthew Haynes, one of the club’s owners, said at a vigil later in the day. “Stopped the man cold. Everyone else was running away, and he ran toward him.”

Haynes and Nic Grzecka, co-owner of the bar, told The New York Times that one man rushed the gunman and took him down, and a second man joined in to keep him down.

“I don’t even know the names of these people,” Grzecka said. “But what they did is incredible.”

“We owe them a great debt of thanks,” he said.

One of the men grabbed Anderson Lee Aldrich’s gun and hit him with it, Colorado Springs Mayor John Suthers said. Police said the patrons ending the shooting minutes before police arrived, and police arrived quickly — just four minutes after the first 911 calls came in. They found the gunman on the floor, the man who’d taken him down still on top of him.

And they found chaos. Blood, broken glass, bodies. The wounded. The survivors, locked into dressing rooms, under tables, behind the bar. A night of revelry, friendship, and safety shatter.

In all, five people were dead, at least 25 wounded.

‘There Were Bodies on the Ground’

Joshua Thurman, 34, told the Denver Post he was on the dance floor when he heard the initial shots, mistaking the sound for part of the music. But they kept happening, and not in time with the music. He ran, hiding in a dressing room with another customer. The two locked the door, turned off the lights, and hit the floor.

“I heard everything,” he said. “More shots, people screaming.”

He said he heard the hero patron’s scuffle with the gunman, heard police rush in. He heard their radio chatter, describing victims by the severity of their wounds. Then he left the dressing room.

“There were bodies on the ground,” he said through tears. “Shattered glass, blood. It was awful.”

Police say they won’t release the names of victims until after autopsies are complete, and they are expected to begin Monday. Friends and family have identified two of the victims as bartenders Daniel Davis Aston and Derrick Rump.

Investigators say they recovered two weapons from the scene, one the rifle Aldrich is believed to have used in the shooting. Aldrich was taken to the hospital for treatment of the injuries he received when the bar patrons took him down.

The Post also reported that a man of the same name and same age as the suspected Club Q shooter was arrested last year in Colorado Springs for allegedly threatening his mother with a bomb and other weapons. Colorado Springs officials didn’t not confirm it was the same man.

“My heart breaks for the family and friends of those lost, injured, and traumatized in this horrific shooting. I have spoken with Mayor Suthers and made it clear that every state resource is available to local law enforcement in Colorado Springs,” Polis said. “We are eternally grateful for the brave individuals who blocked the gunman likely saving lives in the process and for the first responders who responded swiftly to this horrific shooting. Colorado stands with our LGTBQ community and everyone impacted by this tragedy as we mourn together.”

Throughout the day on Sunday, survivors, friends, and family gathered where they could — in homes, churches, parks — to grieve. While police have not revealed a motive, they said their investigation was taking place through the “lens” of a hate crime. It was, after all, the LGBTQ community that was hit by this shooting.

“This is a tragic day for our community. Every person, regardless of who they are, have the right to be secure from fear and physical harm, and actions taken to strike fear in specific communities will not be tolerated,” said Fourth Judicial District Attorney Michael Allen. “This is particularly true for communities that have been maligned, harassed, and targeted by persons or groups intending to intimidate, and cause harm to members of those communities.”