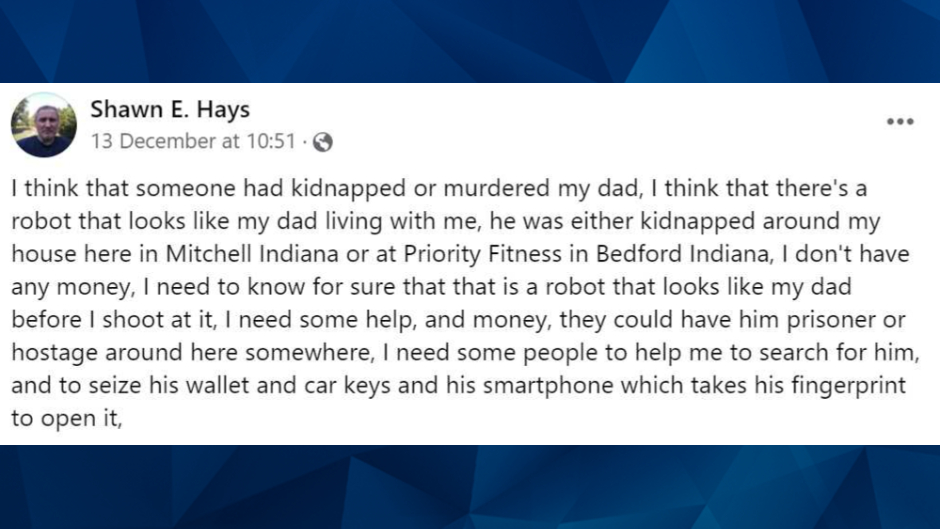 An Indiana man was reportedly found dead in a yard on Tuesday in an apparent homicide carried out by his adult son.

According to WTTK, Shawn Hays, 53, attempted to leave the scene in a pickup truck as Lawrence County police performed a welfare check at a home in Mitchell. Responding deputies reportedly spotted a shotgun in the truck and managed to snatch the firearm after distracting Hays and detaining him.

According to WTTK, several Facebook accounts linked to Shawn include posts about his father being kidnapped and replaced by a robot.

“I need to know for sure that that is a robot that looks like my dad before I shoot at it,” he allegedly wrote in a December 13 post viewed by Crime Online.

During Tuesday’s incident, Shawn allegedly told police that it was not his father living at the home but a robot that resembled him. Shawn also pointed police to his father’s body, according to WBIV.

The news outlet also reported that Richard apparently suffered gunshot wounds to the head and chest. His body was also mutilated and partially dismembered.

Shawn allegedly confessed to shooting, dismembering, and mutilating what he claimed was a robot that looked like his father. Investigators also determined that