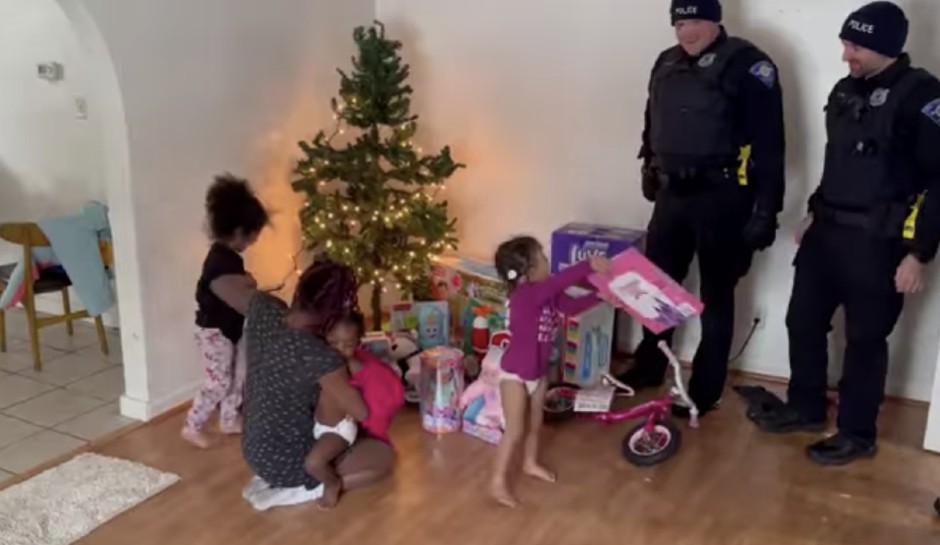 SEE IT: ‘Elficers’ Save Christmas after ‘Grinch’ Steals Presents From Indiana Family

Police officers helped save Christmas for one Indiana family whose presents were allegedly stolen from their home, WNDU-TV reports.

On Saturday morning, police were dispatched to a residence in South Bend, Indiana, for a report of breaking and entering.

The homeowner told officers that someone broke into her house and stole Christmas gifts intended for her kids, leaving them without presents to open.

“They found out that the house had been burglarized, and in the process, the individual had taken all the gifts and even some food out of their refrigerator,” South Bend Police Officer Brian Meador told the television station. “So, they really left this family with nothing much at all.”

Officers reached out to a nearby Fraternal Order of Police lodge because it had recently collected gifts from a toy drive and secured some presents for the kids.

“The Grinch was no match for the Elficers team,” Fraternal Order of Police #36 wrote on Facebook. “A little bit later Officers returned with some items to save Christmas for these three adorable kids!

The post continued: “A rough start with a heartwarming ending! Each year Officers keep a few items on hand knowing these unfortunate events happen. This is one example of where your donations go!”

Video of the family receiving the presents shows two children excitedly darting toward a Christmas tree with various gifts underneath, including a bike and doll, according to the South Bend Police Department’s Facebook page.

Meador said seeing the children’s faces made the effort worth it.

“When you see the kids, this morning I was able to go out and deliver the food and the gifts, and to see those little girls’ faces when they saw the presents under the tree and started playing with them, that’s why we do what we do,” Meador told WNDU-TV.

“That’s the positive part, and that’s what keeps us going as officers. And so, I hope it’s a memory for them that’ll last a lifetime. Maybe someday, they’ll be in a position to give back.”