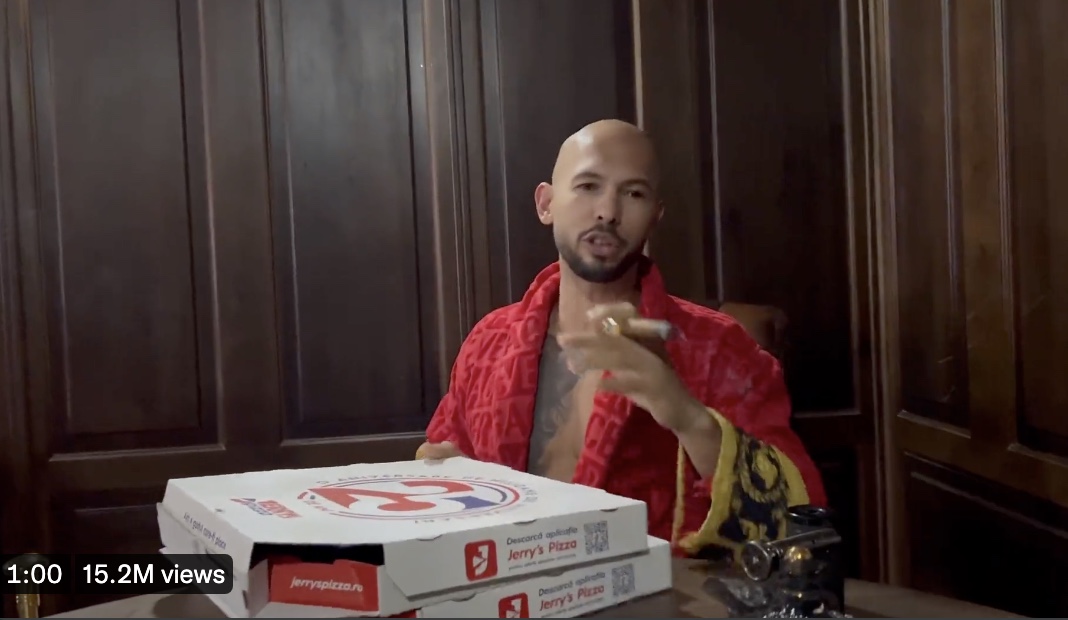 Andrew Tate, an “influencer” who was banned from Twitter because of racist, homophobic, and misogynist comments and allowed back on by new CEO Elon Musk, was arrested in Romania on human  trafficking charges this week after he doxxed himself while trying to “own” climate activist Greta Thunberg.

The former kickboxer and mixed martial arts fighter tweeted at the 19-year-old Thunberg with a photo of himself and one of what he said were his 33 cars, saying, “Please provide your email address so I can send a complete list of my car collection and their respective enormous emissions.”

yes, please do enlighten me. email me at smalldickenergy@getalife.com https://t.co/V8geeVvEvg

Thunberg replied with a tweet of her own. “yes, please do enlighten me. email me at smalldickenergy@getalife.com,” she wrote.

Tate initially replied “How dare you?” but later added a two minute video in which he smokes a cigar and bragged that Thunberg’s response didn’t bother him. He asks for pizza, and someone off camera hands him two pizza boxes.

The world was curious.

And I do agree you should get a life ❤️ https://t.co/mHmiKHjDGH pic.twitter.com/SMisajQRcf

“Make sure that these boxes are not recycled,” he says.

The boxes were from a well-known Romanian pizza maker, Jerry’s Pizza, and Romanian authorities — who had been investigating him since April on human trafficking and organized crime charges related to his webcam business — raided a luxurious home the next day and arrested him and his brother Tristan, the Guardian reported.

“This is what happened when you don’t recycle your pizza boxes,” Thunberg tweeted Friday morning.

Tate was banned from Twitter in 2017 and reinstated in November.

According to the Guardian, the investigation into the Tate brothers began with the US Embassy in Romania got a tip that an American woman was being held in their Bucharest mansion against her will. The brothers were questioned and released, but the investigation has since expanded to rape and human trafficking.

Authorities said in a statement that two British citizens — the Tates hold dual American-British citizenships — and two Romanians arrested this week are believe to have formed a gang that recruited victims by “misrepresenting their intention to enter into a marriage/cohabitation relationship and the existence of genuine feelings of love.” The victims were then forced into pornography “through physical violence and mental coercion.”