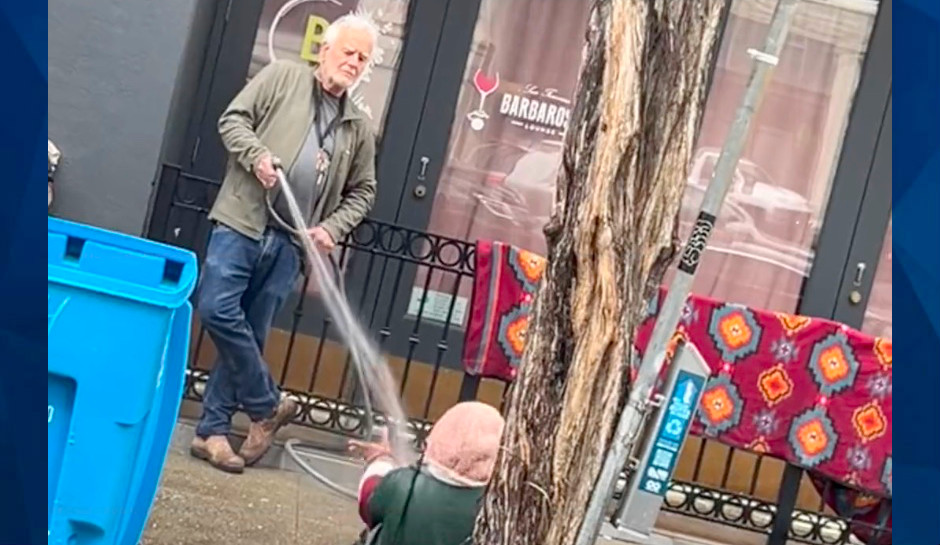 ‘Art-Snob’ ARRESTED After Hosing Down Homeless Lady Outside Posh Gallery

A San Francisco art gallery owner has been arrested on a misdemeanor charge after he was caught on video hosing down a homeless woman on the street outside his business earlier this month.

Collier Gwin was charged with misdemeanor battery for the January 9 incident, which apparently led to the vandalization of his gallery after the video went viral.

Following @SFPD's investigation & reviewing all the evidence provided, my office has issued an arrest warrant for Collier Gwin. Gwin is charged w/ misdemeanor battery for the alleged intentional & unlawful spraying of water on & around a woman experiencing homelessness on 1/9/22.

“The alleged battery of an unhoused member of our community is completely unacceptable,” San Francisco District Attorney Brooke Jenkins said on Twitter. “Mr. Gwin will face appropriate consequences for his actions. Likewise, the vandalism at Foster Gwin gallery is also completely unacceptable and must stop – two wrongs do not make a right.”

Residents of the San Francisco’s North Beach area, where Gwin’s gallery is located, said that the city does have a problem with the homeless population, but most said Gwin’s solution was wrong.

“We have a problem, but that’s not the way to solve it,” said John Schram, another nearby resident.

A woman who lives nearby said the woman Gwin sprayed “was messy” but that the “needs help,” not to be soaked by an irate business owner.

Gwin reportedly expressed some remorse for his actions after his arrest, KGO said.

“I’m deeply apologetic and abhorred when I watch that video,” he said, adding that San Francisco’s homeless problem “completely broke” him.